Yesterday was my Grandpa Rex’s birthday. I called him and interrupted a lively game of Gin Rummy between him and his long time lady friend Miss Judy Jones, as he calls her sweetly. Apparently she wasn’t faring too well, and he was delighted. I asked him how old had he turned this birthday? He replied that while it was a good day for a birthday, he only knew he was more than thirty this year. I remarked on what a coincidence that was, because so was I, and he said we matched. He was very much himself yesterday, at least over the phone. I was so glad he knew my voice and my name.

Grandpa is the one who taught me to love gardening. He imparted so much knowledge and passion that I cannot imagine gardening without his voice and hearty laugh in my head. Even well into his retirement years, growing things has been a thrill for him. He has never been short on amazement, and I wish this for everyone.

To celebrate his birthday, here are some gardening memories of Grandpa Rex. xoxo

When I was a little girl my maternal grandparents lived only a few blocks from our house. I was more or less free to walk and bike there any time I wished, which was a lot. Grandma kept me full of all the sweets that were otherwise scarce in my health-conscious Mom’s kitchen. And she let me grind up blue, pink, and purple sticks of chalk to play with “makeup” when clearly I was too young for the real stuff. Grandma and Grandpa Stubbs’ house was clean, orderly, and happy, a total paradise of love and slow-paced indulgence. Of all the many pleasures and comforts there, of all the habits and memories I have carried into my adult life, the most precious to me are what came from their garden.

Grandma and Grandpa kept several different gardens around their Oklahoma City home. In the front was a thick, lush, densely shaded space filled with massive elephant ears, complex ground-covering ivies, and a tall, arching tree that seemed to me like a living person. I remember having our Easter portraits taken beneath it, and I remember many climbs up that mossy hill excited to open Christmas gifts indoors. Their front yard was stately and organized, every shade of green and white. I was always proud and happy to arrive there.

Their backyard, in contrast, was a wide expanse of soft, green, sun-drenched grass where the five of us kids (plus cousins, eventually) played and played for years. On one side of the lawn there was an ancient and long-dead tree trunk where grapevines grew tall and heavy. I dubbed that the Elephant Tree for reasons I forget now. More elephant ears grew back here in the shade, beneath the grapevines, and it is only as I type that that it becomes obvious why we might have called that the Elephant Tree.

There was a narrow path around that side of the house where basil, lemon balm, and mint billowed out in massive heaps right near the big air conditioning unit. I clearly recall the sounds of that machine, the humidity, and the fragrance of the herbs all braided together like one experience. A necessary combinaton. I would “hike” around that corner, pretending like that sweet, sharp veil of fragrance was a threshold to an alternate reality, then explore the brick path beyond which was basically forbidden to the younger kids. I had a grove of twiggy shrubs there that was ideal for acting out Indiana Jones adventures. That was also where more than a few times I found nests of bird eggs and dead squirrels. Stuff unfit for younger siblings’ eyes.

The other long side of the backyard was in full sun and ruffled with every color of poppy, hollyhock, larkspur, zinnia, marigold, and canna. I knew those names even then because Grandpa was patient and loving enough to teach me. In fact he almost insisted that I learn them. There was a mimosa tree with a single rope swing hanging from one elegant branch. My cousin Jen and I would play there endlessly, brushing each other’s young faces with the pink and white powder puff blooms, climbing the slender tree, ruling the universe in our little girl ways. Mildly drunk on the heady mimosa perfume.

The back of the urban lot, though, was the masterpiece. Grandma and Grandpa planted and maintained a vegetable garden that was, to me, the most beautiful and impressive thing I had ever seen. Even as a little girl I was stunned by not just the presentation of their work but the production. It sure seemed like every day of every year we were eating something delicious from that deep, wide swath of earth. I have images in my head of Grandma’s hands holding heavy tomatoes and of Grandpa pulling onions. He was, every time, so excited! They loved it all so much. Grandpa gave hearty belly laughs at every little garden victory. Their enthusiasm was more infectious than I could have imagined.

Surrounding the unfenced vegetable garden, there was a cottage-like shed at one end. This was more or less forbidden to all of us kids (even me, the oldest and wisest and best) because of black widow spiders and who knows what else. Then there was the stockade fence behind the garden, with silvery arcs of water stains from years of sprinkler action, and a chain-link border on the third side which barely separated us from the neighbors. Even with the flowering borders and comfortable middles, the vegetable garden out back was all I could stare at from the house and covered patio. A perfect destination for my eyes and heart, and now I see that the sight shaped me completely.

Grandpa had divided the big space into several smaller rectangles and carved straight paths between them all. An elongated grid. For many years those paths were lined with salvaged pieces of marble, remnants from some old flooring project I suppose, and I loved and hated those things passionately, in equal measure. I loved those marble slabs, of course, simply because they were there. They were part of my most favorite place, and they were so beautiful. Dark gray with swirls of blue and silver. Smooth. Hard. Perfect in many ways. But I hated them because in the fierce Oklahoma summertime they were so HOT. They were blazing hot. We all scalded the tender bottoms of our bare feet numerous times. And on watering days they were, of course, slicker than anything. No running! We heard that hundreds, maybe thousands of times.

The ways that Grandma and Grandpa’s gardening affected me are just too numerous to list. I feel them with me every season, in almost every task. I wonder constantly how I measure up and hope their aesthetic and knowledge have been transferred to me at least halfway.

Now I have a mimosa tree that has grown up basically as a weed but it is so like my grandparents’ specemin that I cannot bring myself to cut it down. And anytime I see dead tree trunks here at our farm I only want to grow grapes on them so some happy child will give the thing a nickname. Where we have a big air conditioning unit, can you guess what I’m growing? Lemon balm and mint and basil. What else? And where I have shade there are elephant ears, unless the chickens peck them dead. The sunny spots have cannas like theirs and zinnia instead of larkspur, for now. I want children to fall in love with what grows here and learn their names and remember in detail the smells and sounds and feels of our space.

I want to offer them heavy tomatoes and happy memories. 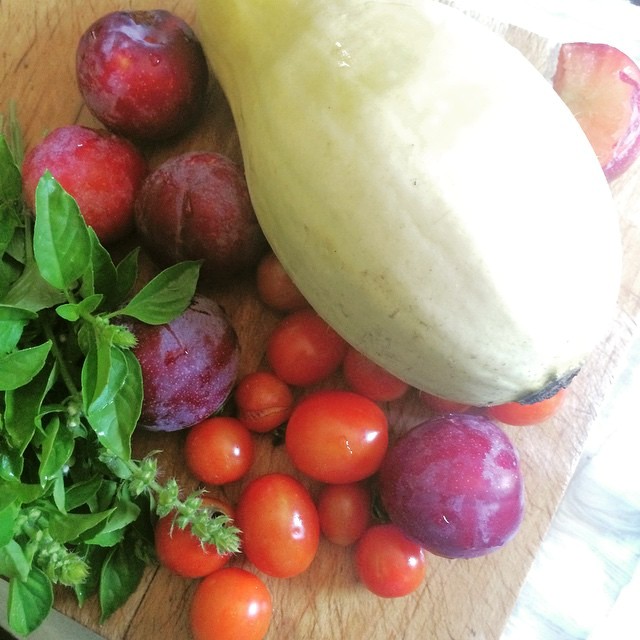 Probably my sweet grandparents worked all those years in their gardens for their own pleasure (I hope they did!) as well as for their health. Maybe you do too, as do we all. I have no idea whether they knew then what an impression they were making. But they never stopped their work. They “puttered around,” as they called it, every single season, together. They actually made it seem more like play than work, which had to be most of the allure. I have no memory of them deciding it was just not worth it anymore, despite how tricky Oklahoma’s growing conditions can be. And I was definitely watching.

So on the days or in those seasons where gardening seems too hard or maybe not worth it, consider the kids who are watching you and the future gardeners you could be impressing with knowledge and passion. Know that even what you see as the ugly parts of your space (like the forbidden twiggy brick path I loved) might be a paradise for someone. And that someone may love you even more for having shared it.

Happy Birthday Grandpa.
Thank you for being a gardener in front of me.
XOXOXOXO