The air is cooler today than it’s been in a while, crisper and drier too. The sky is slate gray with only patches of blue here and there, and where the afternoon sun manages to scrape through the clouds, its light is a dull silver instead of the usual gold. The evocative fragrance of a bonfire mixes with the smells of hay, leather, and chicken litter, so that closing my eyes takes me back to our beloved Buffalo Mountain.
Out of nowhere a breeze kicks up, scattering a thousand fragile oak leaves and slicing through  my long but thin cotton sleeves. I am reminded gently that we’re still in the middle of January, that the sublime springtime fantasy these past weeks was exactly that.
Our sweet little Chunk-Hi is happy doing lots of things in this world. He is just one of those people animals who is easily pleased, easily amused, and easily satisfied. But a few things in life really put him over the top. One of them is running free.
He always has free run of his own field, together with our horse of choice, and he employs that liberty with zeal. But when we release Chunk to roam the range, so to speak, he really kicks up his skinny little heels. Following are a few photos of our sweet buff enjoying a little elbow room. 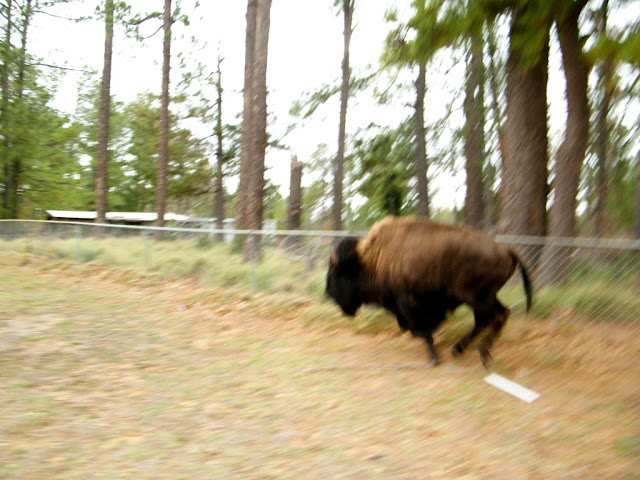 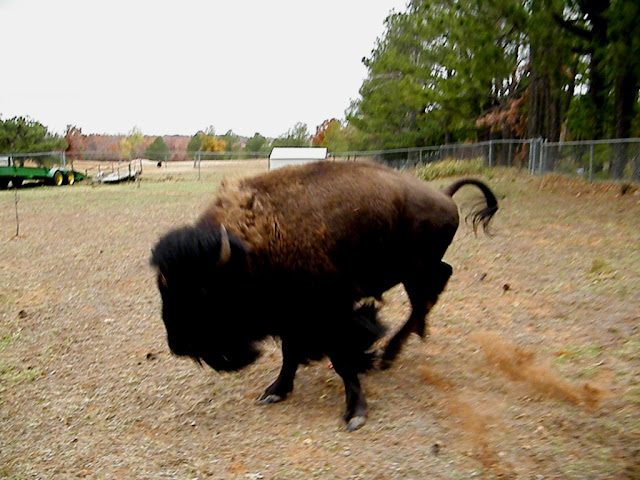 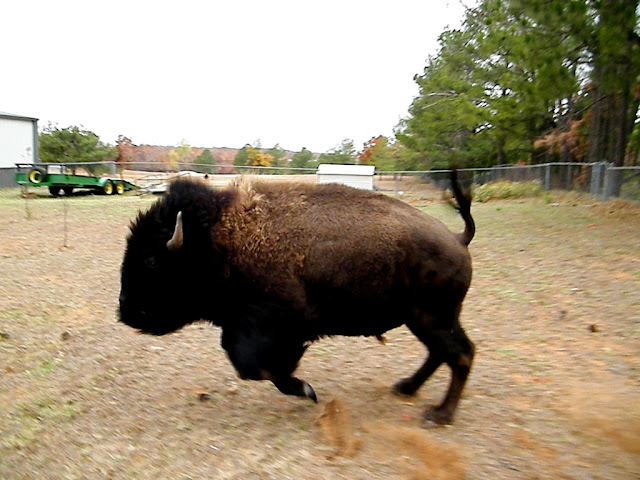 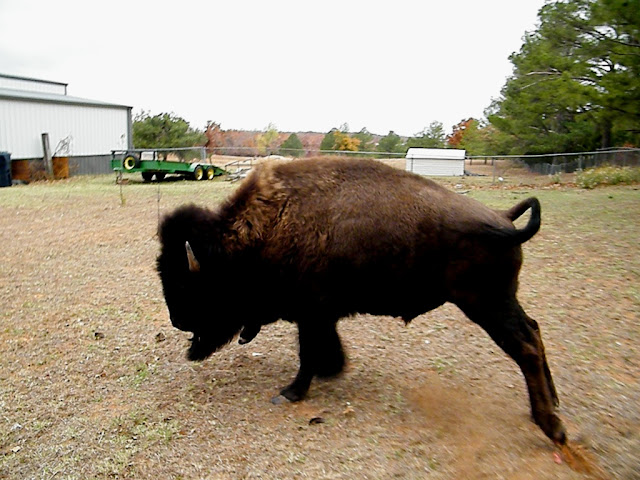 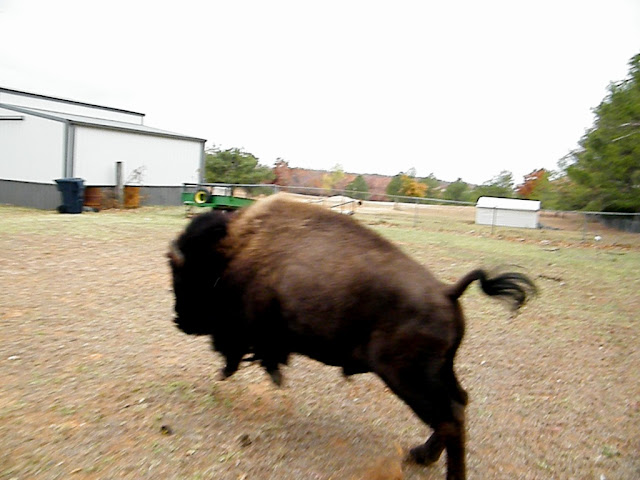 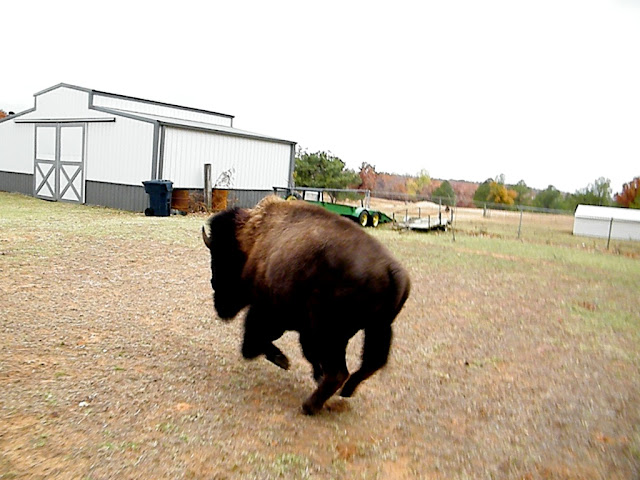 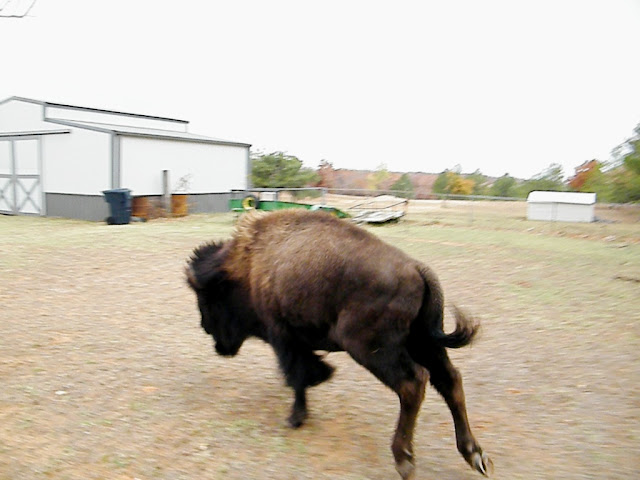 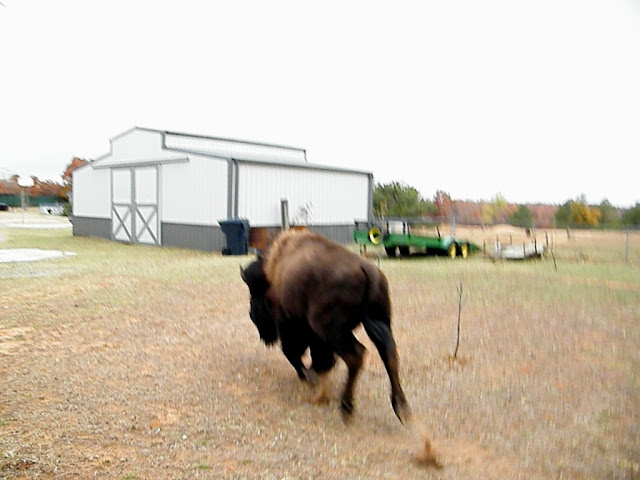 We’re crazy about him. He likes us too, if only because we shower him with graham crackers and allow him running days like this.
Feel the Wind in Your Hair Today
xoxoxo
Nestled just off the heart of OKC is a part of town called “Historic Stockyards City” or, as lots of locals call it, “Cowtown.” For more than a century, ranchers and cattlemen from around our beautiful United States have been delivering their delicious cargo here for distribution to hungry, carnivorous people like me.
Oklahoma is, after all, at the crossroads of America. We are where four major interstate highways intersect. And we have a lot of cows. And we are the Horse Show Capitol of the World. And I love parades and anything we can do to reinforce the atmosphere of Christmas frivolity without spending a thousand hundred million dollars. I also really like excuses to cuddle with Handsome in the cold. All of that is the background for today’s story.
Okay. 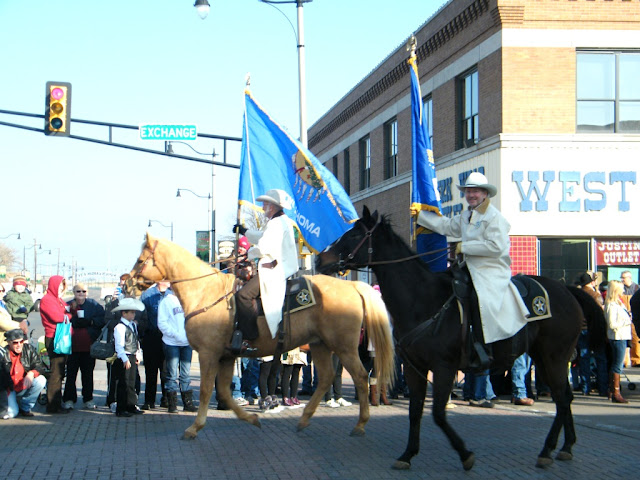 I will always have a soft spot in my heart for our state’s blue flag.
Learning about the symbols was my favorite part of fourth grade.
Every December the good people there in Cowtown erect a tall, festive Christmas tree (you can see it in the background in the photo below) and host a really fun, really different sort of parade to kick off the season. Handsome and I have grown attached to this little local tradition, and that is exactly how we spent this beautiful wintry Saturday morning. 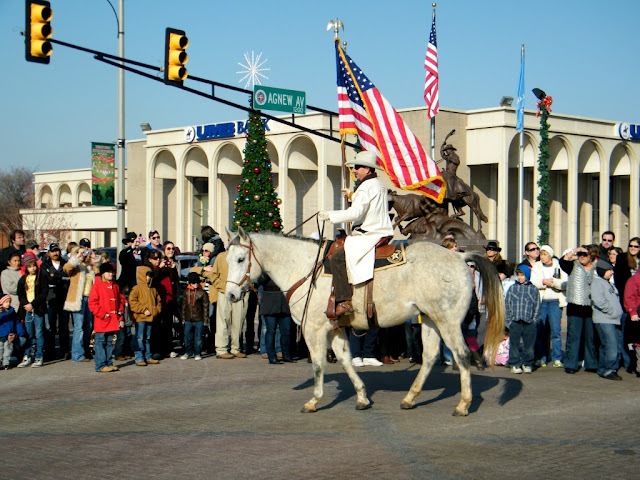 The air was cold enough to keep our toes numb and our cheeks red, but the sun was so bright and the sky so clear that we felt just perfectly comfy. We cuddled together at the front of an elbow in the parade route and soaked up the Christmastime mood. And let me tell you, there was plenty to go around. 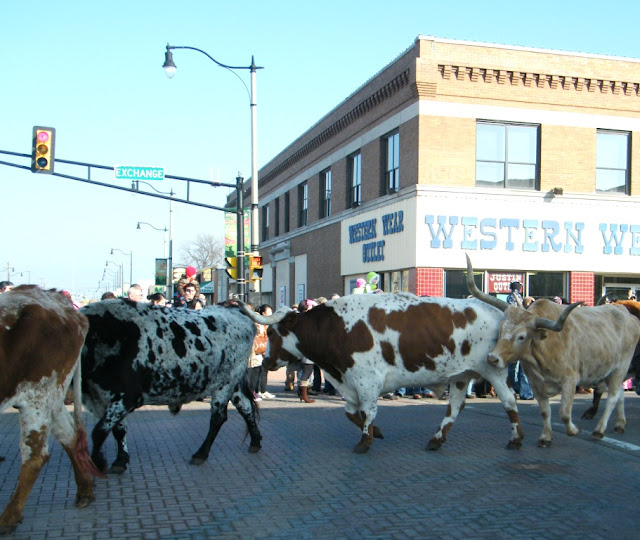 Longhorns also cuddled as they tiptoed through the bricked streets, unrestrained and unconcerned. These gentle behemoths seemed unnaturally calm in the shadow of a well known steakhouse, Cattlemen’s. 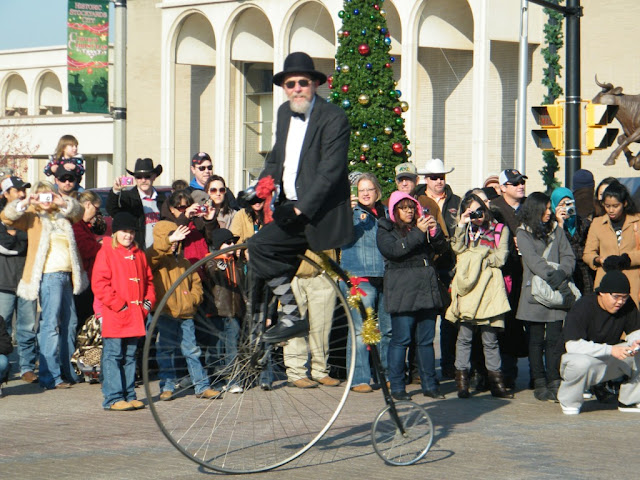 A little steam-punk style for Christmas, anyone? This costumed cyclist looped around to wish me a Merry Christmas! 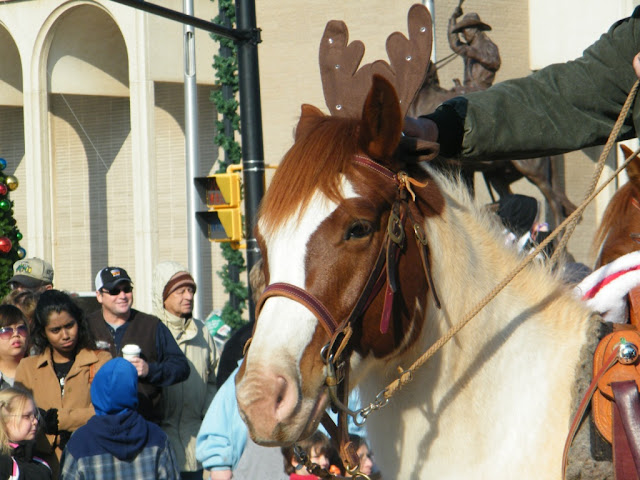 This sweet creature posed for a moment so we could snap a photo of her equine reindeer antlers. It took no more than twenty seconds for me to start formulating horse decorations for back at the Lazy W. The chicken coop is being entered in a Christmas decorating contest, of course, so why not let the big animals join the fun? 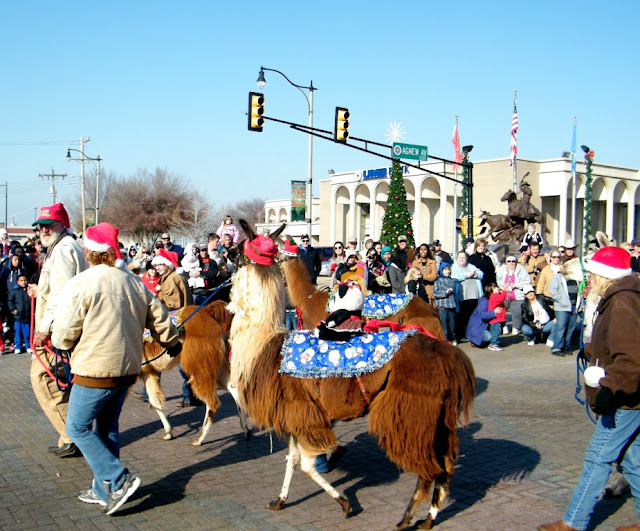 I almost wet my pants laughing when a baker’s dozen of llamas, festooned to the hilt in Christmas finery, came strutting past. Seriously? They were all wearing hats and carrying teddy bear passengers. Because that’s how llamas roll. I cannot get enough of their skinny little legs and arrogant faces. Awesome. Merry Christmas, Sirs. 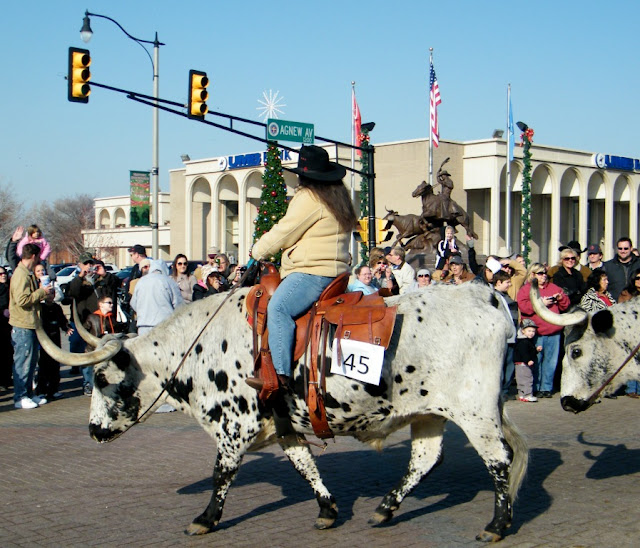 The silly hearted llamas were followed by a very serious pair of saddled up longhorn steer. I have been daydreaming about saddling up our lone buffalo for a while, and after talking it over with Chunk, he is mostly okay with it.
This photo above gives me a pretty good mental image. Theoretically. In my imagination. But probably not. Not because I couldn’t do it; I just choose not to. 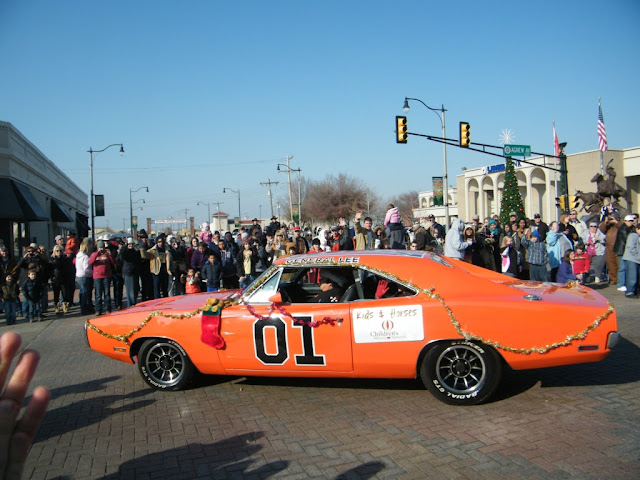 The General Lee made a surprise appearance, garnering more whooping and hollering than even the Jolly Old Elf himself. If you happened to see my car show post from summertime, this is the same car. Gyoog-gyoog-gyoog! 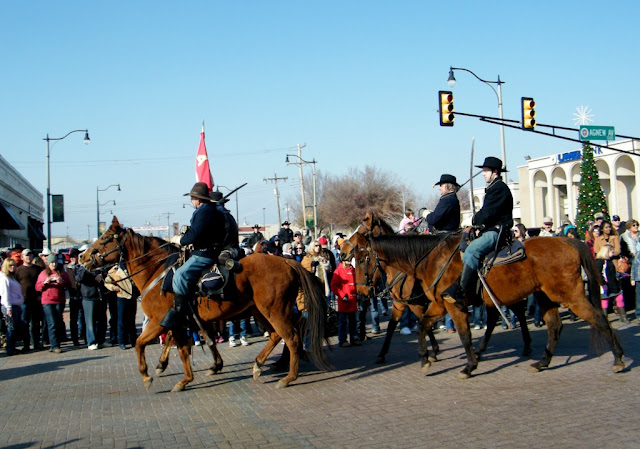 Speaking of General Lee, we saw a small Union group too. During the Civil War, of course, Oklahoma was still Indian Territory. Handsome thinks we would have sided with the Confederacy. I am less convinced, given the fierce cultural conflicts with Native Americans at the time. 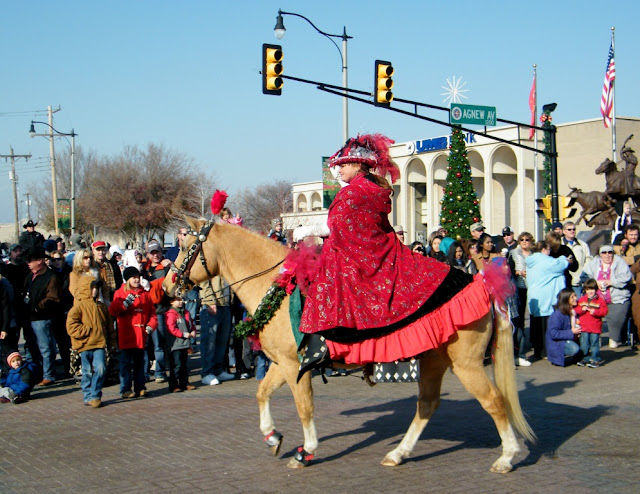 This gentlewoman and her horse were dressed so elegantly, so festively, in their red and silver and holly garland and feathers… that I felt ridiculously under dressed in the same clothes I wore to a hockey game last night! 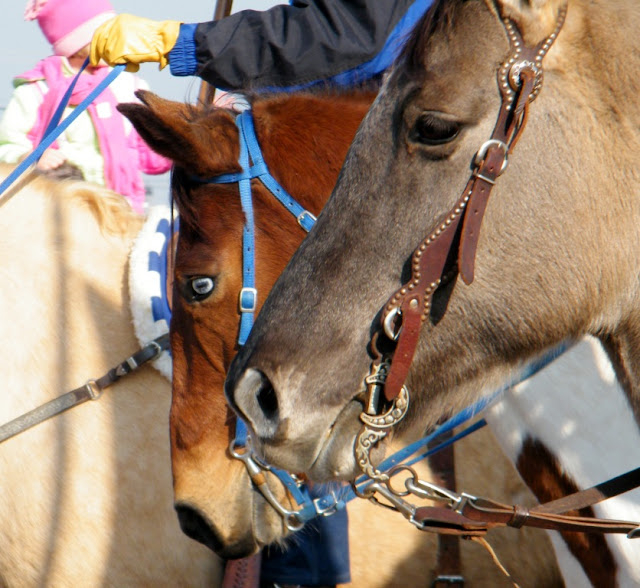 These blue eyes caught our breathless attention from a far distance. 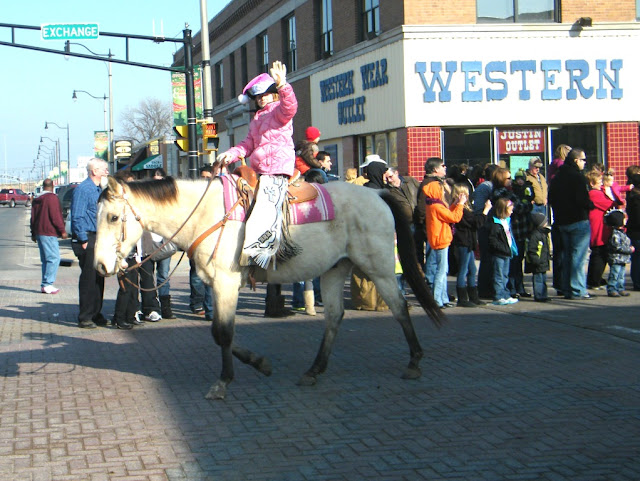 Of the many spirited and creative parade entries this year, my onlooker’s heart goes out to this little girl. She was dressed in cowgirl pink from head to toe. She waved and smiled at every single person watching. She yelled “Merry Christmas” to me. And she kept tight, gentle control of her horse the entire time. Merry Christmas, sweet nameless girl. 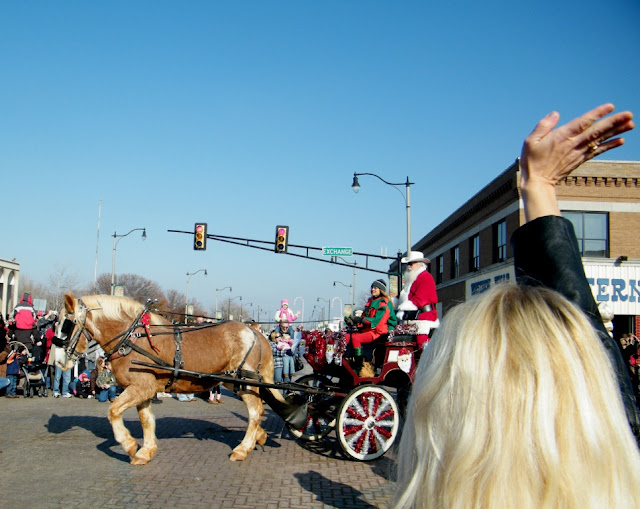 The very last piece of the parade, of course, was Cowboy Santa. This is me waving frantically to get his attention.
Never. Even. Looked. At. Me. In fact, his wagon seemed to speed up a bit as they wheeled around the bed where we stood watching.
Chances are that wasn’t the real Santa, anyway. But it did hurt my feelings a little.
As the parade wrapped up, we joined the happy crowds walking around the shops in Cowtown and Handsome bought me early Christmas gifts, because that’s how he rolls. We talked excitedly about entering next year’s parade ourselves, and I relished the feeling of Christmas coming to a rolling boil in my bones.
However you celebrate,
Whatever your local traditions,
Wishing everyone a mid-month dose of easy fun!
Merry Christmastime!
xoxoxo
Yesterday evening I had the slightly unusual pleasure of going with Handsome to a work event. An actual work-work event, not a social-work event. Although there was a delicious barbecue meal served and we did enjoy a little socializing. But technically it was work for him, a co-op meeting about smart energy sources and asset management in our great state.
I always enjoy seeing him in the context of his job, and last night was no exception, He shines. I am so proud. As an added bonus, I was freshly inspired by the speaker to learn more about the energy discussions that are taking place all around us. You may or may not know that in many ways Oklahoma is something of a benchmark for this wide reaching global issue and that our citizens, our professionals, are considered the go-to experts in the oil and gas industry.

Photo Source
Before I begin to stutter out my pedestrian understanding of these important topics (this might take a few days), allow me to share a few personal notes from last night:
Okay, that’s it for this morning. Hopefully I have properly whetted your appetite for energy information. Hopefully you turn off the lights when you leave the room. Hopefully you say Happy Statehood Day to the nearest Oklahoman. Hopefully you have the sense to wear local colors to local events.
Have a fantastic day everyone!
xoxoxo
Earlier this week, another front tooth bit the dust. If my memory is correct, then this makes Dental Event Number Nine in my thirty-seven twenty-five years on earth. It’s a little bit exhausting. It’s a lot expensive.
I would so like to tell you that I lost this tooth white water rafting, that the waves crashed me up against a mossy boulder and bloodied my nose, but that I am such a good swimmer I dove down and retrieved my tooth from the fish-laden river before helping reclaim the floating oars.
I would like to say that I lost this tooth while doing yet another P-E-R-F-E-C-T back-handspring with a round off when an earthquake hit the farm and I had no choice but to crumble to the ground, face first.
I would like to say that I was wrestling our little buffalo, holding him sternly by the horns, when a hay truck drove past the front gate and distracted us both, resulting in a sudden mouth injury from his massive horns.
I would also like to say that I am kidding, that I did not spend half of my week at the dentist and that we are not lining my mouth with paycheck after paycheck. But none of these things is true. I just felt the tooth (it’s actually a crown, per the previous injuries) fall off into my hand as I was about to take a sip of coffee. Simple as that. Quiet. No blood. No pain. No drama. Also no pity.
It seems that aside from adjacent frustration, losing one’s tooth in no spectacular way begs precious little comforting. Anyway, I am so over this. I am thankful, however, to have the crown reattached now, delaying the pricier and far more painful and time consuming implant process.
This is a first-world problem, as my friend Julia likes to say, so I really should stop with the complaining. I am grateful to go to the dentist and to have a dentist I like so much. I am grateful I wasn’t white water rafting, because being a good swimmer is irrelevant if you are afraid of fish. I am grateful that I wasn’t doing back handsprings when an earthquake hit, because I can just imagine how many stickers I would be tweezing out of my hands. And the idea of me wrestling our little buff is silly. He’s a lover, not a fighter.
Happy weekend everybody! Brush your teeth and kiss them goodnight.
xoxoxo