I have recently devoured the most fascinating book, you guys. It is the most soul nourishing, intellectually stimulating, and flat out humbling life story that I have ever read, and now I have an aching physical need to discuss it as soon and as thoroughly as possible. Won’t you please join me?? 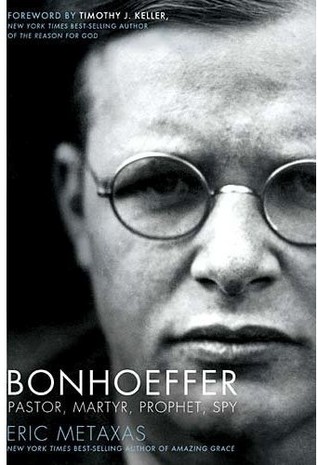 The very real trouble, though, is that for a couple of weeks now I’ve been trying to pin down my thoughts on this eye-opening piece of biographical art, but with limited success. It’s honestly been like trying to nail jello to a wall, my own amateurish thoughts are so scattered and varied. I’ll try to dive in and and offer you something here, but please just read this book for yourself. It’s so good, for so many reasons.

Okay, here we go. Everybody take a deep breath.

You are surely familiar with early twentieth century greats like Albert Einstein, C.S. Lewis, Franklin Roosevelt, Winston Churchill, Mahatma Gandhi, and Pablo Picasso. Each in his own way, these brilliant minds were busy nourishing and challenging the world during one of its darkest chapters. But what do you know about Dietrich Bonhoeffer? He was a contemporary of those men, too, and a peer in many ways, a German citizen whose contributions to history during these incredible decades have gone largely unnoticed.

Dietrich Bonhoeffer was everything the book title promises… a brilliant and devoted pastor and a cultural prophet, a spy against his own government, and ultimately a martyr for his cause.

This month, thanks to a bold reading assignment by the lovely Ms. Misti C., our famous little Oklahoma book club is on the verge of discussing this thick, hefty biography. I am so excited. This book produced so much sparkling thought and has generated so much worthwhile conversation here at the farm, that I actually believe it could be used as a solid textbook for either a history class or a theology class or both. At least, I’d very much like to see my daughters and nieces and nephews all read this. That’s how much historical perspective and spiritual grit is offered in these 542 pages.

The blockish paperback copy I purchased covers German and world history, religion, philosophy, culture, family dynamics, romance, politics, and more. It also has at the very back several pages of discussion points and questions for further study. Handsome and I have already spent many hours exchanging ideas on the questions raised, and I can imagine that the book club dinner at the end of this week will be one for the record books! 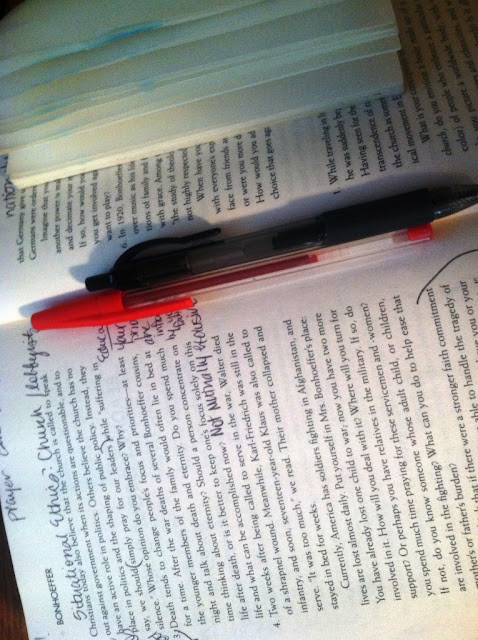 Misti suggested posting multiple times on the book, and I just might use the discussion questions to do that.

This book has really affected me. I have to say that not only is Dietrich Bonhoeffer’s life story itself fascinating and motivating… moving me to deepen my religious questioning and purify my relationship with God… but the prose is just wonderful. It makes me want to be a better writer. Metaxas manages to inform the reader with thousands of historical facts and foreign names while constantly building heavy drama and spinning the intricate secret tales of World War II. It is a cleanly told story, not over-romanticized in my opinion, but still reverent and humane. The best possible way a story like this can be told.

Metaxas starts with Bonhoeffer’s childhood, providing context of his upbringing and his value system. By learning about his parents’ contrasting but complementing personalities and views on the world, the reader can easily follow through this man’s personal evolution. It all makes so much sense when you see his adult life as the culmination of his childhood.

And by learning more about what life and politics were like in defeated Germany at the end of the first World War, the reader gains a fresh perspective on how an evil man like Adolf Hitler was able to rise to such staggering power. Seeing that timeline from an inside, ground-level view puts everything in a different light. The complexities of being German but not Nazi, or of being patriotic but not socialist, all of it is wildly eye opening. Then add the dimension of fundamental changes in the German church during those years, and the stage is set for revolution and revival. Thrilling stuff, you guys. But it all happens with organically valuable, careful methods.

To me one of the most mesmerizing things about this life story is how Bonhoeffer’s strong personal views emerged slowly but vividly over time. How his relationship with God grew against all odds. Employing music, meditation on the scriptures, prayer, and exhaustive reading and writing, he built structure and ritual into his private spiritual walk and saw these efforts flower and fruit into all kinds of beautiful things. He evangelized with his passion as well as his intelligence.

“A truly evangelical sermon must be like offering a child a fine red apple
or offering a thirsty man a cool glass of water then saying ‘Do you want it?'”
~Dietrich Bonhoeffer

The human subject of this biography was himself an accomplished author, penning such modern theological classics as The Cost of Discipleship and Ethics. I’d heard of them but never seriously considered reading them. It now occurs to me that by reading Bonhoeffer’s biography before reading his published sermons and books, we can gain plenty. We benefit from watching the student evolve into the teacher through earnest seeking and studying, through personal trials of faith and lots of rich life experiences. In short, reading Bonhoeffer’s methods of reasoning and his personal journey make me want to read his conclusions.

Bonhoeffer asked hard questions of himself and the religious community a large:

These are themes that have been bothering me for a while, since leaving the Catholic church almost twenty years ago and recently having serious troubles with the Protestant church I’ve been calling home. My book club friend Misti cannot know how incredibly well timed her assignment was.

Now I am fueled to take responsibility for my own journey of faith and stop blaming the “church,” whatever I thought that was. I am excited to see how much can be accomplished in a short length of years, seeing that Bonhoeffer was killed at 39, the age I will reach in a few weeks. I am amazed but not surprised by how much joy can be had in the midst of grief. This happens in my life almost constantly, but I love to see it happen to other people.

I suppose the religious angles of this book struck me most deeply, but that’s just the state of my own being right now. This book offers the reader just as much in every other sphere that it covers, so if you are a World War II history buff or a native German or perhaps a student of sociology or politics, you’ll find plenty to keep you interested. And I guarantee you will walk away better informed than you were before, probably with a deeper appreciation for what the German people endured during Hitler’s Nazi reign.

You will learn about the unseen and complicated, gradient resistance against Hitler. You will glimpse the suffering of the many groups he brutalized. You will sense the physical and cultural beauty of that part of the globe then feel the change in its emotional climate as the second World War heats up.

Metaxas serves so much in this book I have trouble simply telling you about it. It’s the story of an exceptional man living in an incredible time, and it is told with great poetry.

I could talk and talk and talk and write and write and write about this book for hours, but I have many things to do and I know you do as well. Maybe we’ll revisit this material again, and I hope you find time to read this book if you haven’t already. Before closing please let me share a parting thought… One of Bonhoeffer’s friends and colleagues, Martin Niemoller, is credited with writing this poem while imprisoned by Hitler. I think it’s telling in so many ways:

Also, recalling my personal mantra to be thankful for everything and “Redeem the Time,” consider this quote from one of Bonhoeffer’s morning devotions:

“Make the most of your time! Time belongs to death, or, still more so, to the devil. We must buy it from him and return it to God, to whom it must really belong. If we inquire the will of God, free from all doubt and all mistrust, we shall discover it. Always give thanks for all things  Everything we cannot thank God for, we reproach him for.”

Wow. I will say once more, find this book and make time for it. And please join the conversations here! Your participation means a lot to me.

“There is meaning in every journey
that is unknown to the traveler.”
~Dietrich Bonhoeffer
xoxoxo