My first car was a 1960 Ford Galaxie.  I loved it.  It was huge and rusty and smelled like a damp cellar, but it got me (almost) everywhere I wanted to go.  I inherited the beast from my Grandpa Dunaway after just a hundred years few months of practicing on dirt roads in Ft. Towson, OK.  Now, you want to talk about good memories, I have a hard time thinking of better ones!
Grandpa Dunaway aptly christened the car “Flattery” because, well, we all know where flattery gets you.  Ahem.  This was cute and hilarious to me when maybe it should have been a red flag.  But, like so many teenagers, I made independence the key to my happiness.  The Flattery years were a time for celebration! 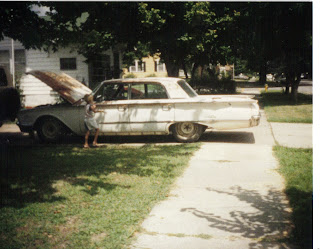 My Dad, always the patient mechanic and city-wide tow service, will certainly beg to differ that I was ever in those years independent.  What a little snot I must have been!  Now, of course, I see the difference between independent and simply mobile.  Yes, that is a huge difference indeed.
Thank you, Dad, for always being there to help me out!  I still have no idea what a solenoid does.  And I am sorry I never saved enough money to put cool wheels on that car; I know you wanted it to have baby moons.
Ole Flattery had a classically loud mid-century horn, loud like a foghorn, which had a habit of shorting out before dawn.  This was a favorite event for the neighborhood, I think.  Kind of bonded all the households.  Helped everyone not sleep too late.
You are welcome for that, 41st street.
Flattery’s body was so rusted that now I feel a moral conflict when describing the car as white.  Sometimes if I brushed against it, especially around the driver’s side rear fender, something resembling paprika would cling to my hand or jeans.
Don’t worry, though; another feature of my teen chapter was wearing too much black, so no white jeans were harmed in the brushing of my rusty car.
The front bench seat had its original upholstery.  Well, whatever was left of its original upholstery after the car’s stint in a field.  I found the foamy depression to be very comfortable.  I knew how to move out of the way of that spring.
Flattery’s radio was original, too, the awesome chromed push-button kind that is destined to only broadcast KOMA (oldies station in these parts).
I could write pages about this machine, as it was a character in its own right!  The important thing, though, is that Flattery will forever live in my heart as a privilege I did not deserve and as a host of lessons I could have learned if I was paying better attention.