She had already spent at least an hour with him at the end of the day, getting her jeans nice and dirty, snuggling and brushing and leading him. Riding him with barely any tack despite his boundary-pushing mood. She played with her horse happily, part woman and part little girl, while in the tree-rimmed valley my beloved Oklahoma sunset gave us a kaleidoscope show of reds, oranges, golds, and streaky, dramatic blues.

Once or twice the two of them stood motionless and stared into the forest for a long time, probably listening to deer and resting. But I imagined them staring into the future, wordlessly communicating like they do. I imagined her forming her beautiful new life right there with her thoughts. Strong and capable, graceful, dangerous, beautiful. 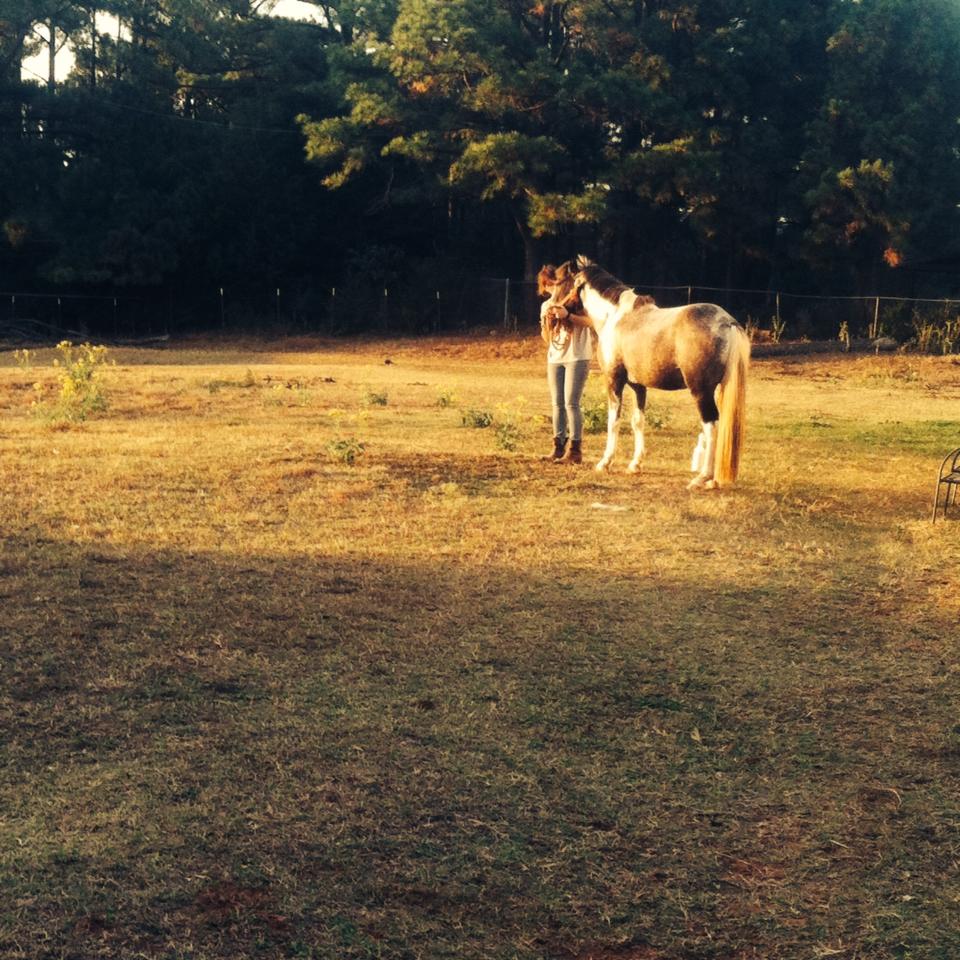 Several hours later, after dinner was cleaned up and we had made a second batch of oatmeal lace cookies (try them with Nutella, friends) and after all three of us had watched a scary movie (it is the month of Halloween, after all), I stepped outside to inhale the stunning moonlight and say thanks for such an incredible day. She followed me and we stood on the warm concrete sidewalk together and just enjoyed the cool breeze. It was a particularly gorgeous night, cool and breathy, no violent wind. Everything was illuminated silver under the night sky. The geese were even mostly quiet. After a moment she giggled and said she was going to scare Dusty (her horse). She was wearing running shorts now, no longer the afternoon’s jeans, and she was barefoot. She scampered around me and down the sidewalk to reach the front gate of his pasture. I was the one to follow this time and called after her with a warning of stickers, but, you know, she’s okay Mom.

She passed through the gate and tiptoed downhill in the glowing wash of moonlight, navigating wildflowers and nocturnal cats. There was a moment when a bug surprised her and she did a fancy little dance and wiggle to free herself, and we both giggled endlessly. Then she called Dusty’s name in a stage whisper but didn’t find him yet. Continued in wide circles and gentle, searching steps under the silver sky. Big dark pools of tree shadow all around her.

Then she let out that trademark whistle she and Handsome have always used, that two-syllable song that starts low and ends high and never fails to catch or calm a horse. That got him, as she had to know it would. But he was uphill from her, behind her near the barn instead of down where she was looking. When she turned her womanly body to see him her pretty face lit up like a little girl and she ran fast on bare tip toes. Caution abandoned. He half-trotted down to see her, and they hugged. She wrapped her arms around his thick neck and he bent that thick neck across her back. There was much baby-talking and deep whinnying. So much mutual affection.

I just stood there soaking it up, amazed once again at how generously God answers prayer. And how suddenly. Amazed by how much sensation and emotion can be packaged into one moment.

Of course she could not resist another midnight ride. And given his obstinacy earlier that evening, she probably felt it her duty to tame him a bit. So for the second time in a week, right there under the brilliant moon, feet bare and heart light, she launched her tiny body up, belly first across his bare back. No reins, no help, nothing. He is so fat right now! And though he isn’t very tall she barely reached that high flat spot of his back before exploding into a fit of laughter. This triggered him to start walking toward me, and she hung there upside down (I don’t know how), all big smiles and playful kicking legs, trying to find purchase.

When she finally did gain the upright advantage, she just swung one smooth, lean leg over his rump and pivoted quickly so she was square and perfect, like that was the exact place she had always been meant to sit.

And of course it is.

He was calm for a moment, staring at me wide-eyed with those thick broomy lashes, maybe for permission or help, who knows? Then the silliness began again. They cuddled and kissed and nibbled at each other; she laid forward and wrapped herself like a baby monkey all around his ample middle; and the breeze braided together her dark hair with his black and white mane. I could barely hold back happy tears.

Whatever you are praying for, whatever your hope, stay strong. I even think, the more hopeless a situation feels, the more important it is to continue in prayer and gratitude, in hope and seeking. Walls that keep you from seeing the blessing are sometimes weak, cruel illusions. And the walls that are very real can crumble in an instant. Make good use of your waiting season, but do not give up on any miracle. Okay? Love is terrifyingly powerful.

Here is where we’ve poured our hope
and where we’ll wait for it to grow.
~Emily Freeman
XOXOXOXO