Hello there fine fellow bibliophile… What are you up to today? What is on your table to read? Are you progressing quickly and easily through it, or is it requiring some effort?

I just finally polished off a book that should have taken me far less than the eighty-nine years and six months I spent reading it. But it is an excellent book and I did enjoy it and would love to chat with you about just a little.

Please pour yourself some sweet iced tea or something and get comfy for a few minutes… We can have a tiny little book club meeting, just us.

The book is Typee by Herman Melville. Yes. That Melville. The same author of Moby Dick. Typee is lesser known to contemporary readers, although that may change with its recent re-publication by Rare Bird Books. 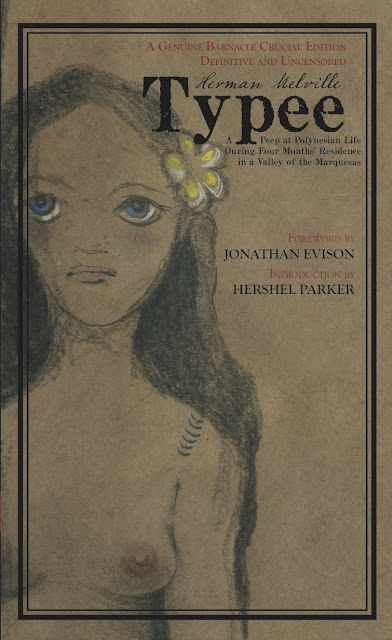 What’s interesting, before we get to the book itself, is that Typee, while not his most critically acclaimed work, was evidently Melville’s literary debut and was a huge commercial success. Isn’t that refreshing to hear? So often we learn about great historical talents who suffered and struggled for their art, living as paupers and often dying penniless and unknown, their names connected only to posthumous fame. But not Melville, at least not in his beginning. He splashed onto the publishing scene in 1846 with this tantalizing story about a man’s sensuous and eye opening experience living four months among savages on a remote Polynesian island.

The story is fascinating, and it’s less than 300 pages including the foreword and epilogue. Why it took me so long to read says more about me than this book.It is written in that somewhat bulky, long-winded 19th century style. Just not my fave, you know? Also, Melville handles somewhat delicate matters in effusive ways that make sentences long and paragraphs longer. At least in my opinion. Again, this reflects more on me than him. When he gets to meatier subject matter, though, like observations of humanity and some detached philosophical questions about “savage” versus “civilized,” I am all into it. He speaks clearly to me then, making good use of the bulk and loftiness. But at least some of the sexiness of this Polynesian adventure is lost on me in the murk of so many words.

Nathaniel Hawthorne reviewed this novel at its release, a fact which is perhaps more interesting to us now than it would have been then. Here is what he had to say:

“The narrative is skillfully managed, and in a literary point of view, the execution of the work is worthy of the novelty and interest of its subject.”

Besides feeling a bit thick and cumbersome to me, Typee really does offer an escape if you relax and just read fluidly. Don’t agonize over every syllable. I read most of the chapters while Oklahoma was still in the grip of the bitterest end of winter, so what sensuous details I could evince were truly delicious. Coconut groves, topless group bathing in mineral lagoons, dark, dangerous waterfalls, and every aspect of this people’s peaceful, languid living… It grew into an oasis in my mind. And I thoroughly enjoyed a recurrent theme of innate chivalry, feminism, and easy desire…

As for the philosophical questions Melville tapped on the shoulder, I think the most fascinating were about the differences between modern, civilized life and the savagery of the islands as he had experienced them. He does more than just highlight the obvious pleasures of an extended vacation in this Eden-like place; he points to the polluting effects of Christian missionary behavior and the deficits in Western culture.

Melville asks directly and frequently the question, will the savage be happier if he is made “civilized?”

“In a primitive state of society, the enjoyments of life, though few and simple, are spread over a great extent, and are unalloyed; but Civilization, for every advantage she imparts, holds a hundred evils in reserve; – the heart burnings, the jealousies, the social rivalries, the family dissentions, and the thousand self-inflicted discomforts of refined life, which make up in units the swelling aggregate of human misery, are unknown among these unsophisticated people.”

Overall, I enjoyed this book. I won’t read it twice, but I am glad to have tried it. Typee is part fantasy, part anthropology, part satire and social commentary, and certainly a sensuous read if you can relax enough to get past the 19th century style.

Look for Typee at your local book store, like Full Circle in Oklahoma City. If you’re near me and want to borrow it, I am always happy to share books!

Thank you, sweet Julia, for exposing me to something I would probably have missed without your guidance! Now let’s bring on summer. I need a lagoon and some coconut milk.