What a day it has been for the birds! From early morning till afternoon I have enjoyed one feathered pleasure after another, and something tells me the evening will bring still more.

The earliest avian beauty happened while waking up with Handsome slowly, ever so slowly, during Hot Tub Summit. The sky was dark and moody and the farm was dead quiet. Then gradually, as if some unseen person was slowly turning up the volume on the world’s most charming soundtrack, birdsong filled the foggy south yard. From tree to tree, from cloud to grass, in perfect proportion to the growing daybreak, a delicate symphony. We started our day with who knows how many species of happy, peaceful, life-grabbing melodies. Divine. This really helped us carpe the diem with love and optimism.

After Perfect Coffee and halfway through Chores Round One, I noticed Pacino’s cage (out on the front lawn) was open (it was my fault; I’d left it closed but unlocked while doing some cleaning) and he had let himself out. His wings are not clipped so he can fly, although it rarely happens. Thankfully he stayed on top of his cage, just perched there all business like calling to me.

I watched carefully and in a minute or so he climbed down the side of his cage to visit Fancy Louise, our sweet, cuddly hen who was convalescing in a smaller sheltering cage nearby. He really loves her so much. Everyone does! The whole scene was so sweet I put chores on hold to sit on the sun-baked driveway and just watch.

As soon as I sat down, Pacino promptly waddled over to me and then Mia joined us and there was much bird competition happening between the two, and so of course that all needed to be captured on video. The commotion drew the attention of llamas and cats and other geese, and eventually (though the video does not show this) the buffalo. 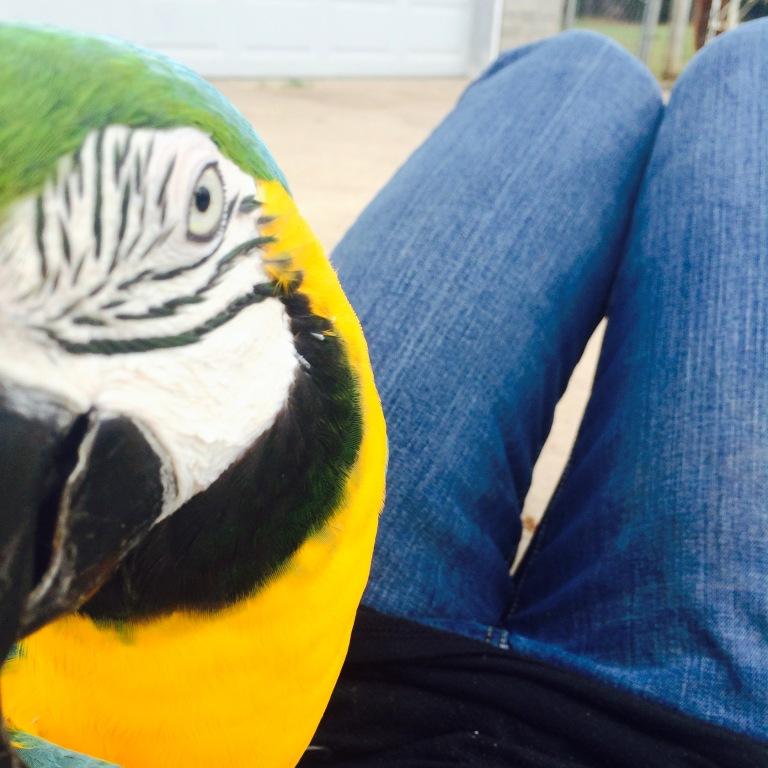 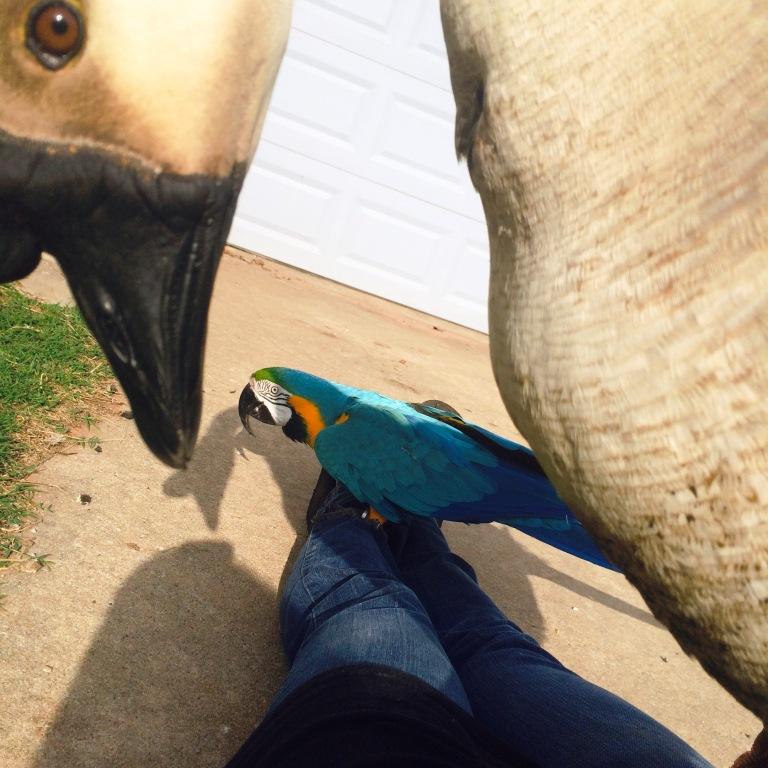 Later in the day I had the very magical pleasure of taking two chickens to visit my friend Mrs. Robinson’s first grade classroom! This is the second time we have done this, and in fact the first time (last Spring) one of our feathered passengers (Ethel, one of the fancy Polish hens) was just a new little chick. The other one actually wasn’t a Lazy W resident yet. Frageelay (as we call him now) was hatched from an incubator in one of the second grade classrooms at Sky Ranch Elementary in OKC, so technically today was not so much a visit for him as a homecoming.

So I loaded a roomy, hay-lined cage into the front seat of my Jeep and drove to town. What a gorgeous afternoon, by the way! Perfect for being chicken ambassadors. 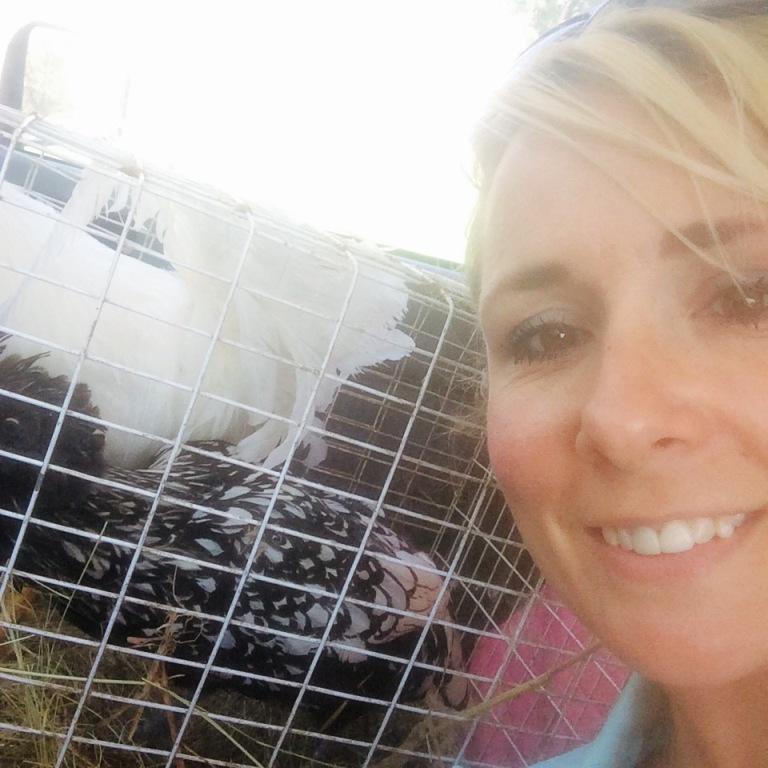 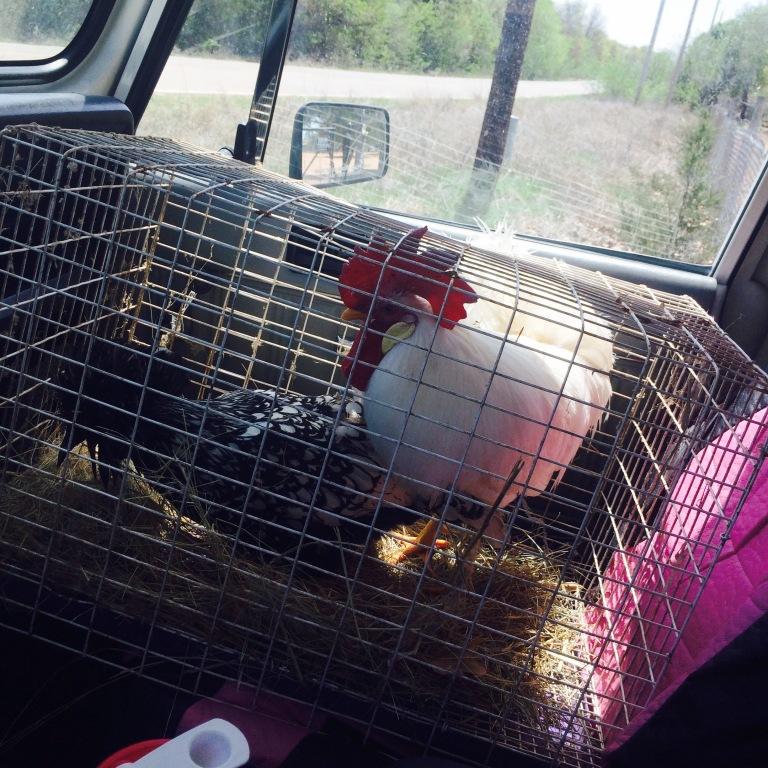 The chickens and I stopped at the school’s front desk to sign in and say hello to all the nice office people. Suddenly Frageelay started crowing. LOUDLY. Do you remember when your kids were little and they did something slightly disruptive in public but it was so cute you couldn’t help but love every second of it?? That’s how it feels when your rooster crows extra loud in a pin-drop-silent grade school. I scolded him gently and then whispered promises of so many apple cores when we got home. My good, loud, pretty boy. 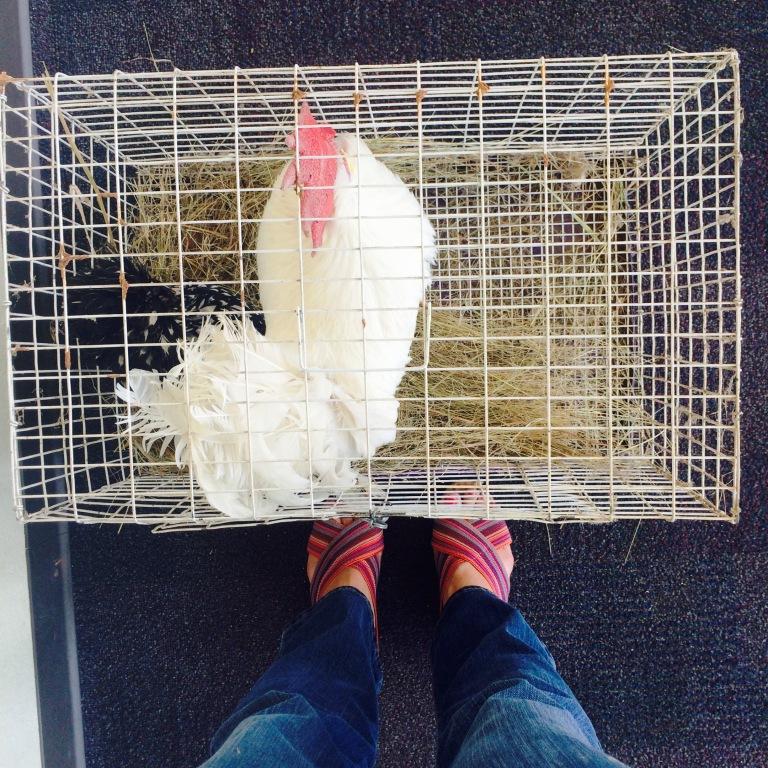 We visited the teacher’s lounge first and made lots of friends. A few wonderful ladies were eating lunch, but no poultry dishes. And I don’t know how we are so lucky, but Mrs. Robinson’s blouse today was just spot-on for holding Ethel. I loved it!!

You almost can’t tell where Ethel ends and her blouse begins. So fun! Then Frageelay made his hot displeasure known again. I accidentally got a snapshot of Mrs. Robinson’s expression. I told you, this rooster is not quiet. This afternoon at Sky Ranch Elementary, his voice drew a crowd several times. 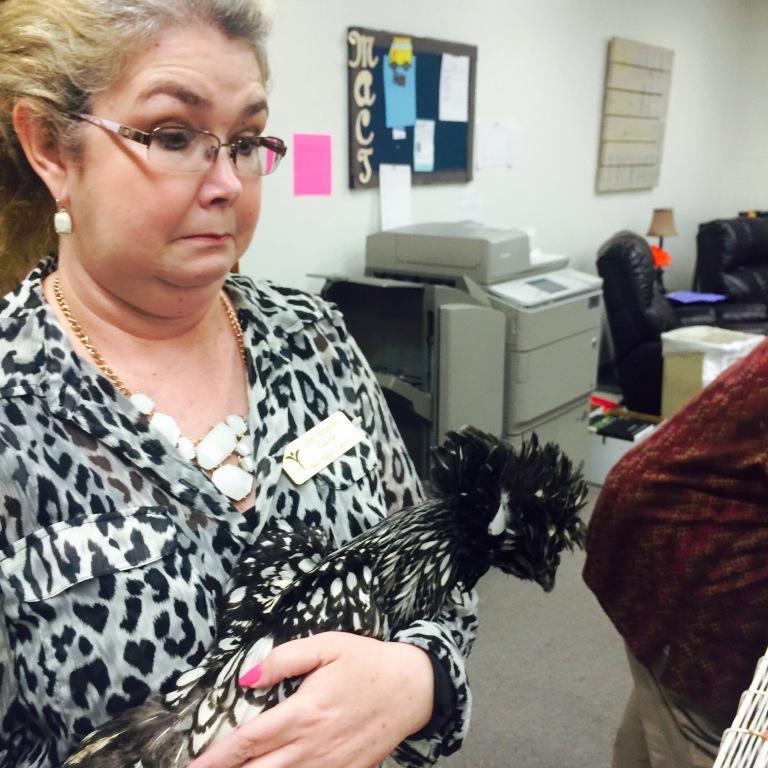 This is his serious face.
It basically always looks like this, but sometimes it’s just extra serious.

Then we started making the rounds through the cafeteria and hallways, attracting sweet little hands and sing-song voices the whole way. I was thrilled by how many students remembered our chicken day last year! They even remembered the white rooster having hatched there, though they named him something else. I still can’t remember his original name! That’s horrible. Only one little boy asked if he could eat the chickens. Ha!

Mrs. Robinson cuddled Ethel in her arms pretty much the entire afternoon, which put that fancy little hen into a state of pure bliss. She napped and relaxed and as far as I know never pooped on anyone. It was the most precious thing.

And just look at this sweet young teacher loving on Frageelay! She absolutely made my day. I told her how much this adopted rooster loves to be held, and she nodded appreciatively, saying that well, that makes sense, because she held him a lot when he was a baby. (xoxoxo!!) I almost cried, not kidding. 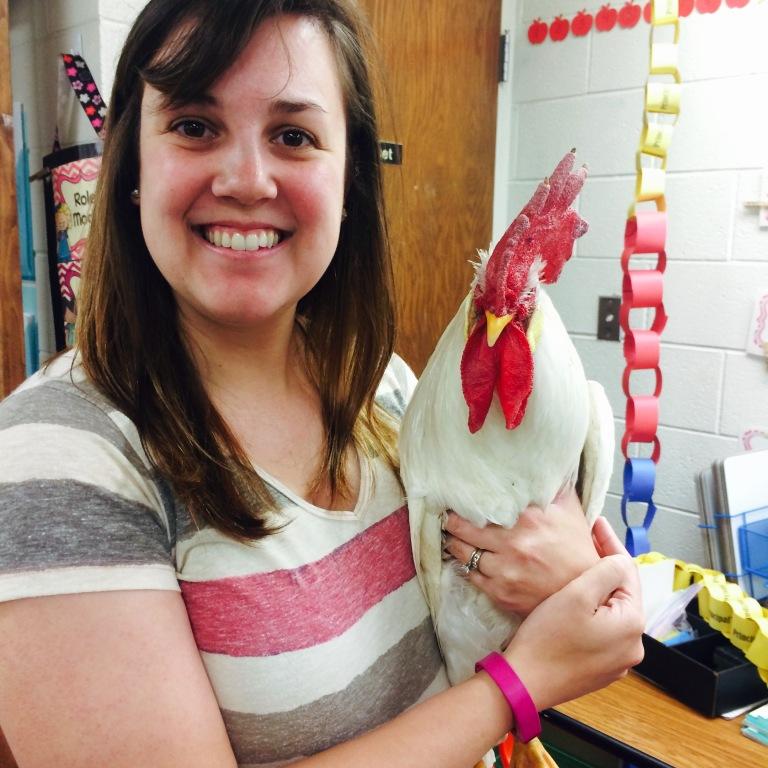 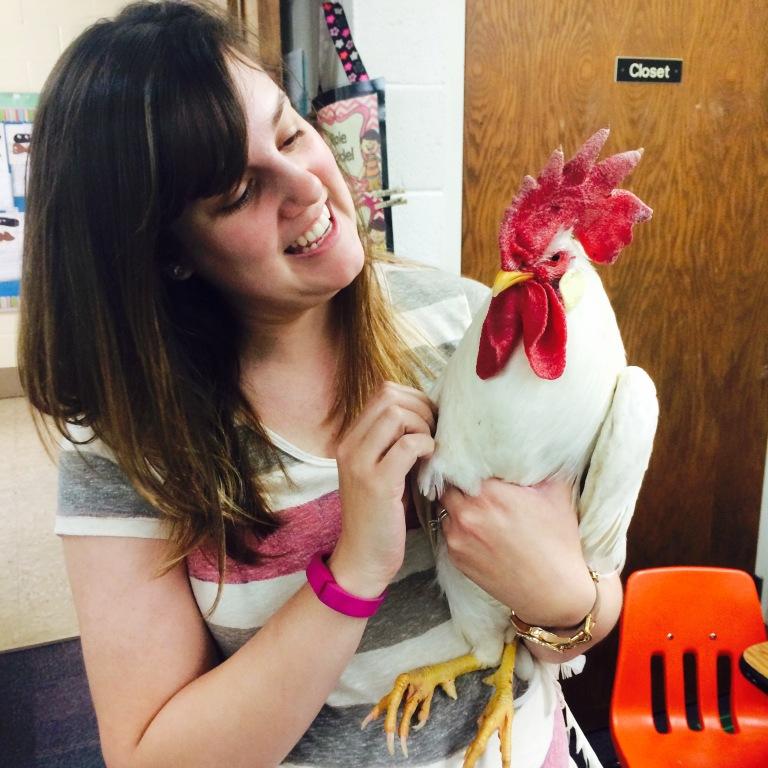 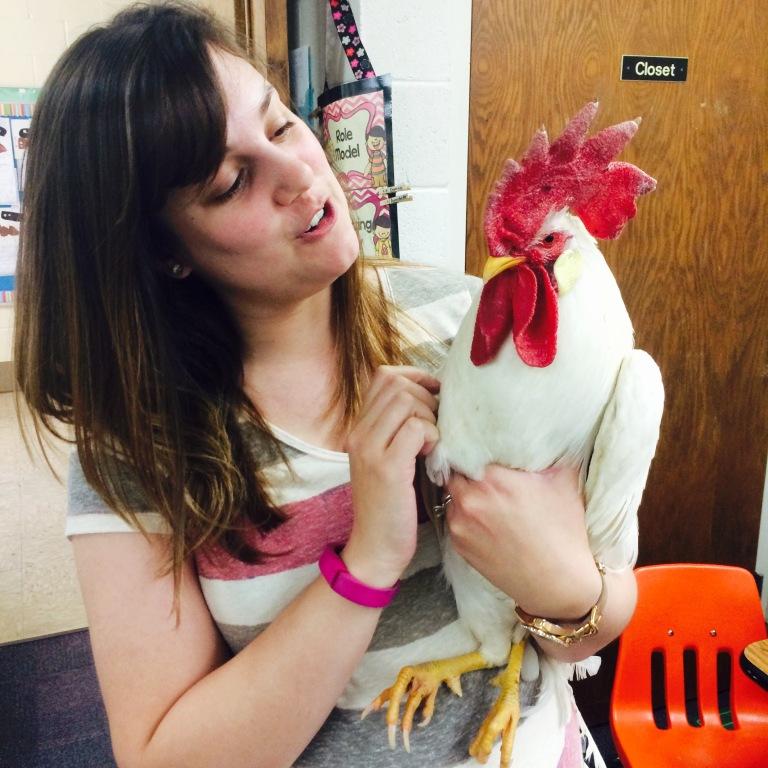 Another lucky and magical detail of the day is that earlier Mrs. Robinson had hosted another classroom visitor who was presenting to the kids a book about a polka-dotted chicken. Isn’t that great? It was all complete good fortune, barely planned at all.

The students were all so gentle and sweet and fun with the chickens. They asked both silly and smart questions. I really wish I had a tape recorder to capture the flurry of affection and inquisition. They petted the mostly unfamiliar creatures. They worried over Frageelay’s claws but also overcame that worry. They really wanted to know whether the two chickens were in love, married, having babies, etcetera, and I had to arrest my normally speedy answers and let Mrs. Robinson handle the delicate life-issues stuff. You never know which kids are able to cope with the idea that we eat liquid baby chickens (eggs). I also realize that not everyone is familiar with the idea of chicken husbands (roosters) having more than one wife (Ethel is part of a set with Lucy, you may recall). Life is complicated. 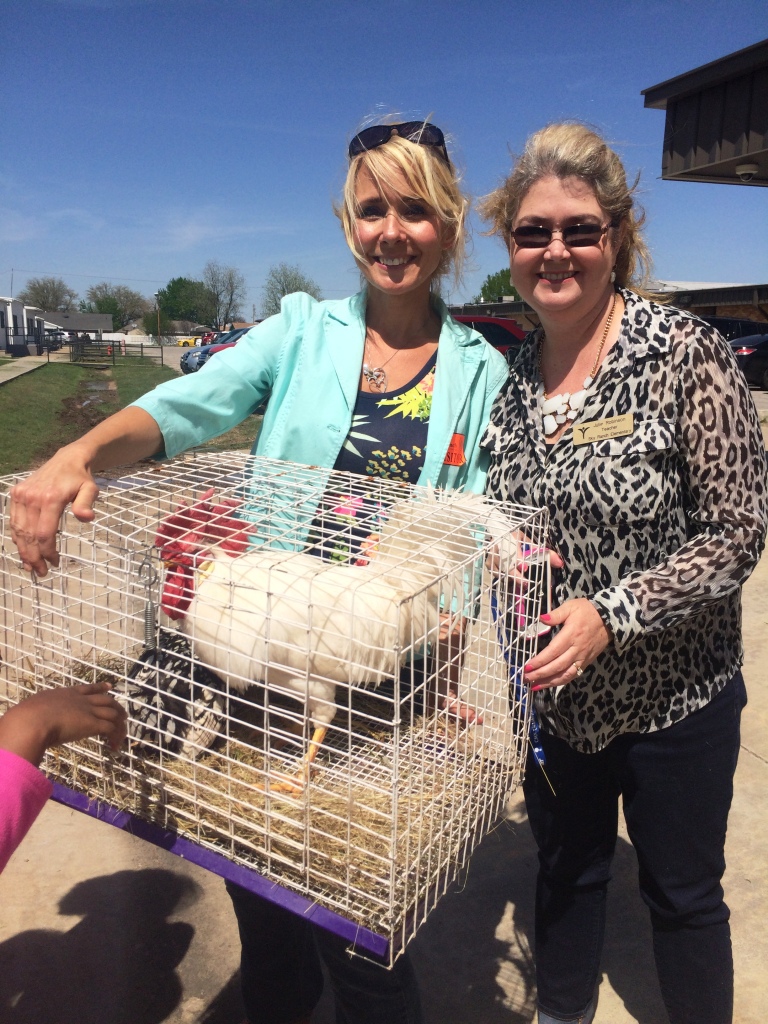 Thank you, thank you, thank you, Mrs. Robinson and Sky Ranch Elementary!! What a fun afternoon we had. The Lazy W would be thrilled to visit your happy, loving school anytime. And of course it’s always the best thing ever to hug the neck of a woman from the past, when our young ladies were babies together. xoxo Sure seems like yesterday.

Not five minutes into our half hour drive back to the farm, these two feathery children of mine were passed out cold. They wrapped up in each other like a yin-yang symbol and slept hard while I listened to the radio and made sure Rascal Flatts never played (Frageelay can’t stand that group and I agree).

And when I got home, guess who was out in the sun waiting for me? Pacino and Mia. Pacino was safely locked up, of course, but Mia was right there. Bothering the heck out of him. They both greeted me warmly. I returned Frageelay and Ethel to their love nest where Lucy was waiting impatiently. And I came inside to prepare our dinner.

Birds of different feathers can flock together
and sometimes they go to school.
XOXOXOXO