One day back in the winter of 1883, during a blizzard and on the verge of a cannibalistic tragedy, an over-stimulated and under-challenged middle aged woman started reading a slew of books that altered her perception of the universe. Her eyes were flung open to new, exciting possibilities and she thrust this shiny new pseudo-knowledge on everyone nearby, whether they liked it or not. While milking the goats, while gathering eggs, while traversing the snowy peaks and dodging hungry settlers, she preached the gospel of the Law of Attraction and started to manipulate her own reality. It was magical. 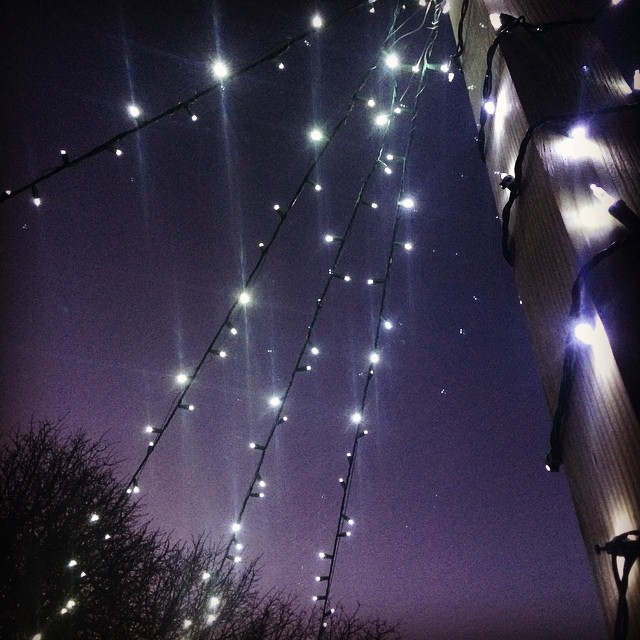 Not really, it was only me, and it was actually quite pleasant weather during the late fall of 2012, and while fresh eggs were plentiful then, we were happily free of cannibals at the Lazy W. But that got you imagining a cold and bleak setting, right? And the driving force of a new line of thinking?

It started innocently enough with a book , which led to voracious reading on the internet and a few other related titles about the Law of Attraction, about the power of imagination and how meditation can fuel your prayers. I scoffed a little, I learned a little, and I experimented. Tested the waters. Prayed about it, actually. I compared this new philosophical material to what I already knew and believed about the Bible (my personal foundation of faith) and I just kind of… thought about it for a long time. I searched my own memory to see if it could be true. Had my mind been manifesting things into my actual three-dimensional life? Is that completely wonky, or is it possible?

Do you remember that “aha Moment” video?

Let’s just bookmark all of that. I pinky promise to get back to it eventually, with concrete, important information, all kinds of adult thinky stuff.

Today I want to tell you a story about me in a fevered stupor, the Law of Attraction, Mitt Romney (remember him?), and my sweet, skeptical, doting husband. Grab some cocoa with marshmallows and prepare to text BW if you have his number. 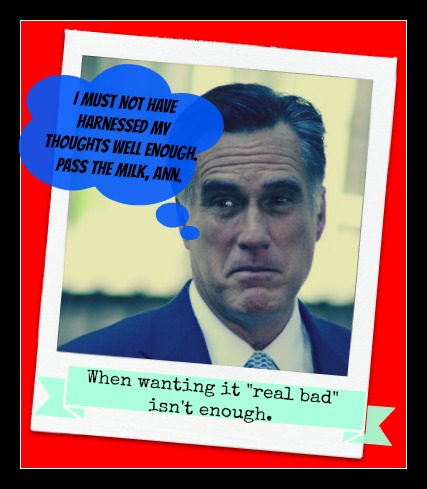 It was early December, almost exactly three years ago, in fact, as I write this. The presidential election was over and cooling. Romney was sad. I was laid up in bed for a few days with an increasingly difficult flu or something equally temporary but incurable. I remember our big, soft bed was oriented against the east wall of our bedroom, not the south wall where we have it now. It was a dark morning, pitch black, and my fever was raging. It was that awful sweaty-shaking kind of sick that makes me nauseous just remembering it. Handsome had been taking really good care of me; he is gentle and attentive and good at condescending to the bed ridden, so I had been pampered. But on this morning he absolutely had to leave me to drive to the city and do Commish things. He was dressed in suit pants and a button down shirt. He smelled shower fresh and was so good looking even in the dark, even with my fever-cooked eyeballs barely open to see him. All week we had been volleying back and forth my new found ideas about magnetic thought (we disagreed to say the least). That morning I had one last chance before he left for the office to convince him of the things floating around my scattered brain. I desperately wanted him on board with me:

“I mean it, Brand, I think this stuff is real. I think if you think about something enough it will happen. What do you think?” So much thinking.

“Babe, no. It’s not real. Mitt Romney wanted to be President real bad and it just didn’t work out for him.” My husband favors clear cut ideas over well executed adverbs.

Check mate? Not even close. But this gentle rebuttal almost made me cry. I remember sitting halfway up to literally grip my husband’s lapels and say earnestly, to his face, glassy eyes flung open now, “He just didn’t want it bad enough!” I’m sure my fever breath was super sexy.

My husband of (at that time) eleven years gently loosed my cold, sweaty fists from his lapels, checked for wrinkles, then tucked me back beneath our billowy comforter. He smoothed my hair and stage whispered, “None of this is real. Now just go to sleep.” Like he was comforting a child who had just woken up from a nightmare! As if!!

He went to work. I fell into a fitful, fevered sleep. He came home frOm work, and I mentioned neither Romney nor the Law of Attraction again that week. I did, however, with some measure of silent pride, make a mental note that I had been imagining in detail his homecoming that day. It happened exactly as I expected.

Okay, friends. Here is where your texting invitation comes in: Please let my sweet but too skeptical husband know whether you are in his camp or mine. Have you ever had an experience with manifesting your thoughts/prayers/hopes/worries into reality? Do you think Mitt Romney is to be blamed for losing that election? Spill your smart guts.

Thanks as always for checking in.

You guys are the best.