I won’t even bother trying to convince you that I never had and don’t have a crush on Johnny Lawrence-slash-the actor who plays him, William Zabka. Obviously, back in the day (it was a Wednesday in the mid-eighties), everyone was publicly rooting for Daniel-Son, but before the hashtag #confessyourunpopularopinions was a thing, I was one of many adolescent girls secretly thinking the taller, better built, blonde-headed guy in the black karate gi had every right to be cocky. 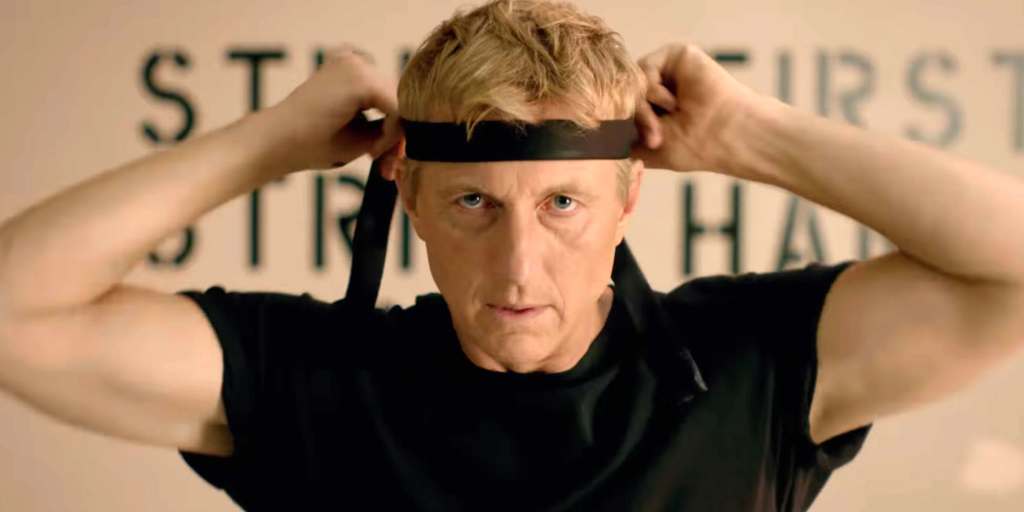 Had Johnny been under the tutelage of Mr. Miyagi instead of the war-damaged Sensai John Kreese, his life would have followed a much healthier path. Who wouldn’t thrive while studying in that zen garden? And had healthy relationships been modeled to him, Johnny would have known how to be sweeter to Ali, Elisabeth Shue’s character. She would no doubt have chosen him over Daniel and everybody else. Obviously. Johnny probably even wore Drakkar Noir!! Daniel was meant to be a flirtatious but still platonic friend, you guys.

We, meaning my real-life husband (who I love deeply and truly) and I, spent a chunk of our Sunday watching the final episodes of the YouTube Red series Cobra Kai. Everything makes so much sense now. My instincts have been proven sound, as the show gives all kinds of cool insight into the characters’ backgrounds as well as into their fast-forward storylines. And it was just plain fun to watch.

Have you seen any episodes yet? I especially enjoyed the scene where Johnny and Daniel are test-driving a car and get caught together reluctantly singing along to REO Speedwagon’s Take it on the Run Baby. Solid gold stuff, ok? And when Johnny is at Daniel’s breakfast table, salting his scrambled eggs angrily and from a ridiculous altitude and with just way too much aggression? I died. I might never salt eggs again without giggling.

If you haven’t yet caught the show, do yourself an 80’s throwback favor and track it down online. And message me if you want to join my brand new support group for Girls Who Secretly Loved Johnny Lawrence and Still Do.

In related snake news (bear with me), yesterday was a designated rest day, but we did more than just watch t.v. We also explored the local flea market, had a late breakfast in Choctaw, and did some summer shopping.

We also took the Shepps for lots of walks outside, planted more flowers and herbs, and worked on getting the pool open for summer. In between everything, the sun shone gloriously and we played several hundred rounds of FETCH.

On one happy lap around the back field, the dogs and I stumbled on a cottonmouth snake sunning himself on the bank of our pond. Naturally, Klaus stopped running immediately where the snake was stretched out and literally stood over the creature like a tall, massive, slobbering bridge. Just stood there. And Lincoln was standing just next to Klaus, both of them looking at me expectantly. I screamed, Lincoln ran like lightning up to the house (he hates it when I scream and apparently I scream a lot more than I realized), and Klaus braced for combat, lowering his belly a few inches. He did not MOVE you guys. He stood there over the snake, ears back, legs stiff, oblivious to danger, yet not knowing quite what I wanted him to do. It’s a miracle he didn’t get bit.

I don’t remember exactly what happened next; it was all a dramatic blur of adrenaline. But somehow Klaus and I made it up to the house and Johhny Lawrence-I mean-Handsome got a gun and we walked back downhill as my heart rate returned to normal and now the snake is completely dead.

Such a close call!! My poor, loyal, skinny black-bear dog.

And my steady, cold-blooded, protective husband who did learn under men like Mr. Miyagi and who does know how to treat women and who also smells very nice, with or without Drakkar Noir.