Our little buffalo has nearly destroyed the outermost fence of the front field, which is a problem for so many reasons. Mostly, it makes the neighbors nervous. And this is definitely gun country, and nobody needs nervous neighbors.

I’m usually not a fan of alliteration, but this time it seemed unavoidable. Sorry.

So yesterday afternoon Handsome and I went out in the pickup with his bag of fence repair tools, a sledgehammer, and a heavy spool of barbed wire. We started working while Chunk-hi and Chanta were up in the shade shoveling back a big pile of soft hay.

Eventually the bachelors finished their hay and sidled their way over to us one at a time, just to see what Mom and Dad were up to. Chunk-hi was especially affectionate to me. He snuggled and snorted and let me scratch his fuzzy ears and steer his massive, carved-wood horns, all from the safety of the truck’s open tailgate. I swear, as long as my feet are not touching the ground, he never tries to get silly with me. If I am on a fence rail or sitting on the tailgate or whatever, he is gentle as a kitten. Plus, yesterday he was in a mellow frame of bison mind, clearly not the frame of mind he had been in when he did whatever he did to the fence. What the zoos might not tell you is that these creatures are extremely moody.

As I snuggled Chunk and accepted big, snotty kisses from his square leathery nose, Handsome continued pulling and hammering the swayed fence panels. He straightened and rewired and shored up yard after yard of double-thick perimeter fencing, incurring bloody gashes and bruised knuckles all the while. Besides playing with the animals, my jobs were tool delivery and moral support.

The noise of fence repair must have triggered Chunk’s guilty conscience, because soon he left my lullabies and face snuggles to wander away from the pickup and sneak up on Dad.

“You’ve got company,” I said to Handsome, although he is less in need of buffalo sneak-attack warnings than his wife.

Handsome glanced over his left shoulder, looked straight at Chunk, and said, “Yeah you did this didn’t you?”

I swear to you, gentle reader, this simple admonition stopped that buffalo in his guilty little tracks. It’s a tone of voice thing, just like with human kids. These animals read us so well, and they do want to please us. They also like to destroy fences, though, so you see the problem.

For the next half hour or so I played with Chanta, the big golden paint horse, and watched my husband and our five-year-old whirling dervish as the front field fence (ack! more alliteration!) was righted. Handsome was mostly crouched over, muscles hard and gleaming in the sun, back turned to Chunk-Hi who just stood there looking terribly guilty and awkward. The funniest part of the scene was listening to my husband muttering a long, even stream of reprimands at the 2,000 pound creature not six feet behind him.

“I can’t believe you did this again. Why? Why can’t you just play with the four-wheeler we gave you? Why do you have to do the one thing I tell you not to do? Do you know what will happen if you get out in the road? You want us to believe this was Chanta, but it has your name written aaaaallllllll over it.”

That last one was my favorite.

Also, have you ever tried not laughing while someone is really angry?

Well, Chunk just stood there and took it. He endured one scolding after another, occasionally swinging his fluffy head to look at me. He’d blink open those beautiful eyes until the whites shone in clean circles beneath his thick black lashes, like he was pleading with me, “But Mooooo-oooom…”

So I raised my voice with mock sternness, “I don’t know what to tell you, Chunk. You know better. Stop destroying the fence and you won’t be in trouble with your Dad.” What else could I say? Sometimes, no matter how cute the kids are, you have to act like a united parental front. That’s what the books say.

Chanta, meanwhile, stepped closer to me and reminded me I was supposed to be rubbing his horse neck and quietly singing him Beatles songs. He assured me of his innocence in this fence mangling episode, and I chose to believe him. Isn’t it also common for the “good kid” to swoop in for extra attention when a sibling is in trouble? Yes. Yes I believe so. 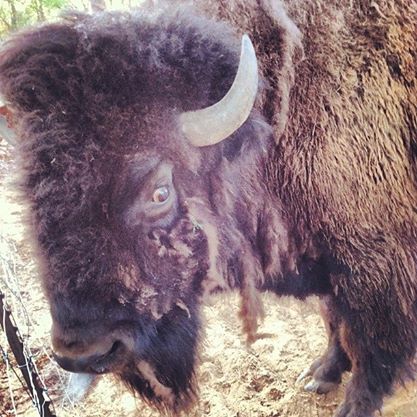 So the front field fence is now finished (dang it!) and the bachelors are back to their happy selves, eating hay and accepting cuddles. The neighbors can relax for a while at least. And my gorgeous husband will have a few days to let his knuckles and muscles recover.

Audience Participation:
Have you ever been caught speaking to your animals like they are naughty children? Have you ever had a pet who seemed hell-bent on senseless destruction? Can you think of a non-alliterative way to say “nobody needs nervous neighbors?” Or “front field fence is now finished?” Help me help myself.