Handsome and I had just finished eating dinner and would have been cuddling and unwinding after a long, hard working week, but he was pre-occupied. He stayed dressed and alert for no apparent reason. I mentioned my plan to take a shower before going bowling later, but he strangely discouraged it. Have you been near me today, buddy? I thought to myself, skeptical of his olfactory senses.

Then a friendly knock at the front door (weird, because we rarely have unexpected visitors) and his excited call for me to come see who’s here… Well, let’s just say I almost passed out on the floor. I was still in running clothes and had zero clue what to expect. And I scare easily. Very easily. Ask anybody.

It was our dear friend Maribeth (my apiary mentor) and her sweet, funny, jovial husband Dean. And they had brought their long livestock trailer.

“What the heck’s going on?” I might have said. Seven thousand irrational possibilities rushed through my dried-sweat, tangly-ponytail mind but none of them were the truth. I hug-attacked Maribeth and trusted from her generous laughter that the purpose of her visit was a happy one.

Side-note: Do you know how difficult it is
to maintain polite eye contact with someone while still
looking over her shoulder at the mysterious livestock trailer in the driveway?
It’s hard you guys. Super hard.
This situation put my manners to the test in a big way.

A few intense moments later, I realized it. Maribeth had brought me another llama. And my husband was okay with it in on it. 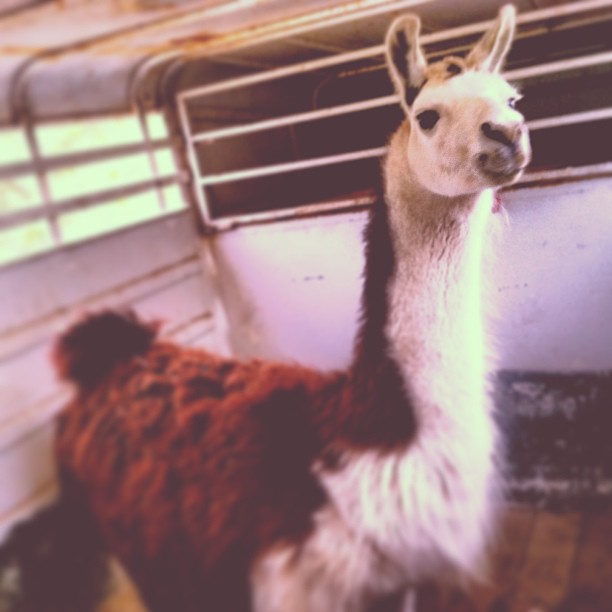 As with all big surprises, suddenly fuzzy little irregularities from the previous day or two started coming into focus. The things Handsome had said about Romulus remembering his family and needing a mate… Other funny little evasive details… My people had orchestrated this awesome gift behind my back, and I was trembling.

We released this glowingly beautiful female from her trailer into the barn, where she pranced around pretty calmly. I hope you can watch this quick video…

Seraphine’s First Moment on Lazy W Soil
If for some reason you cannot view it here,
check out the Facebook page for this blog.
It seems to be working there just fine.

Then at the exact moment that we opened the west doors of the barn, Romulus was all over her like white on rice!! Something flipped in his adolescent-llama mind and body, and his singular purpose in life was suddenly to, umm… gain passage on her hindquarters… He was a man on a mission, and while the object of his affection took things in stride (elegant creature that she is) Chanta, the big paint horse, was thoroughly and violently freaked out.

Dean, Maribeth, Handsome and I watched in hilarious waves of laughter as Romulus fell more and more deeply in lust with his new pasture mate. Chanta sometimes chased them and sometimes guarded us from the R-rated show. It was a fun half hour, you guys, and it made for plenty of cell phone photos and inappropriate jokes. Because deep down we’re all basically immature children. Gradually Maribeth and I tried to turn it into a scientific conversation about animal husbandry and herd behavior and such, but nobody was fooling anybody. This stuff is just funny. 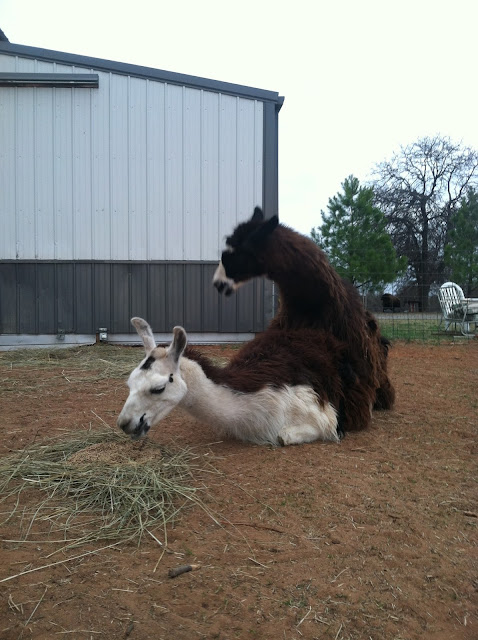 Once the chase was over and Romulus had her, umm, pinned…
Our new girl got quite relaxed. I took her a small pile of hay topped with grain,
admittedly a strange time to serve her a “Welcome to the Lazy W” meal.
But she ate it contentedly.
If I had any doubt about loving her, this removed it.
She is amazing. 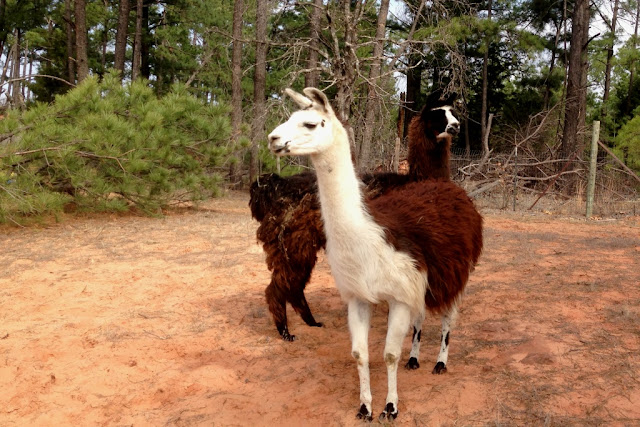 We have had a long, gorgeous weekend to get acquainted, and I can tell you she is just beautiful, you guys. She is sweet, peaceful, calm, and wise. She explores the fence line, luxuriates equally between the sun and the shade, and loves our chickens and honeybees. She speaks four languages and reads the classics. But she also knows which new books are worth a glance. She understands the difference between Bearnaise sauce and hollandaise. She can knit and also drive a stick shift, and just last night she offered to lend me her Florence and the Machine CD. She is a complicated angel on four straight little legs. 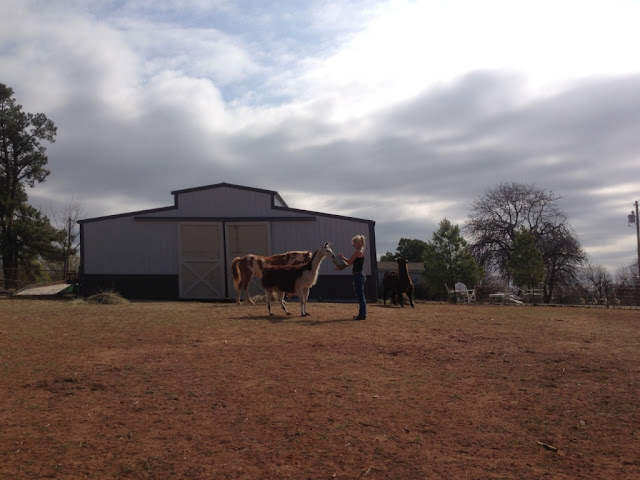 Seraphine is drawn to the rattle of sweet grain in a metal bucket
in the same the way I am drawn to a hissing, gulping coffee machine mid-brew.
So basically we understand each other. 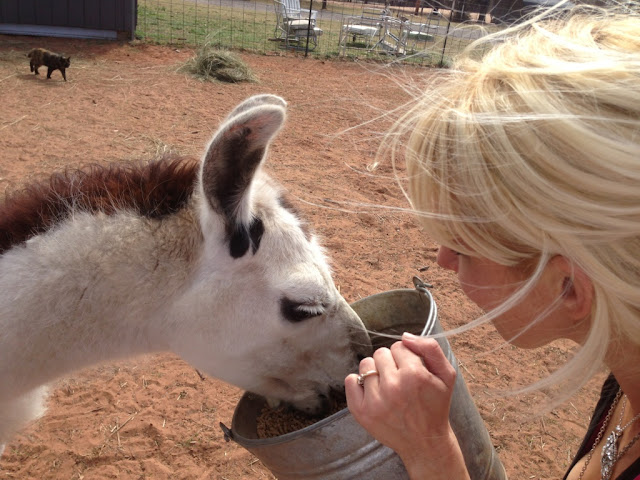 Look at those snow white eyelashes you guys!!
And her face has two sets of distinct black teardrop markings.
She could not be any prettier.
I should tell you that our new llama’s registered name is Yoko Ono. But she doesn’t know that, and it doesn’t fit in too well here at the farm. So during Saturday’s Hot Tub Summit, in a stroke of true serendipity, Handsome and I agreed on her new moniker… 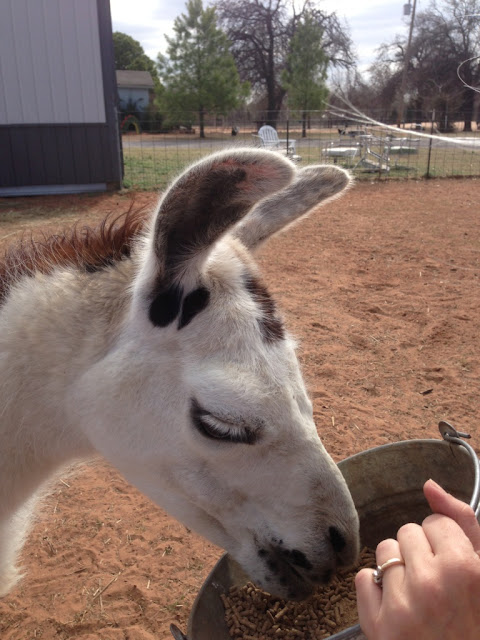 Seraphine.
Thank you so much for spending a few minutes meeting Seraphine. I expect she will make regular appearances here on the blog. If you have any questions for her, let me know. She is very accommodating.
Now I have to go. It’s a cool, rainy day in Oklahoma so obviously I have to go watch the pond rise slowly.
Have a beautiful day friends! May your biggest surprises be happy ones!
“We must never confuse elegance with snobbery.”
~Yves Saint Laurent
xoxoxoxo