Our good friends Bob and Tina are long time season ticket holders for Oklahoma University women’s basketball, and they are very generous to share their tickets with friends when they have to miss a game. Today Handsome and I were the lucky recipients of their good will. And as luck would have it, although we didn’t realize it until we arrived in Norman, it was the season’s bedlam game!  OU versus OSU, you guys. We are lucky ducks.
We were bouncing excitedly toward our aisle seats just as the court was flooding with coaches, players, and cheerleaders. The stadium was packed, by the way. Packed to its collegiate gills. And the music was blaring and the lights were flashing, and it all got my heart pounding within seconds of being inside Lloyd Noble Center. I suppose lots of games start that way, but today the adrenaline lasted until the very last moment. 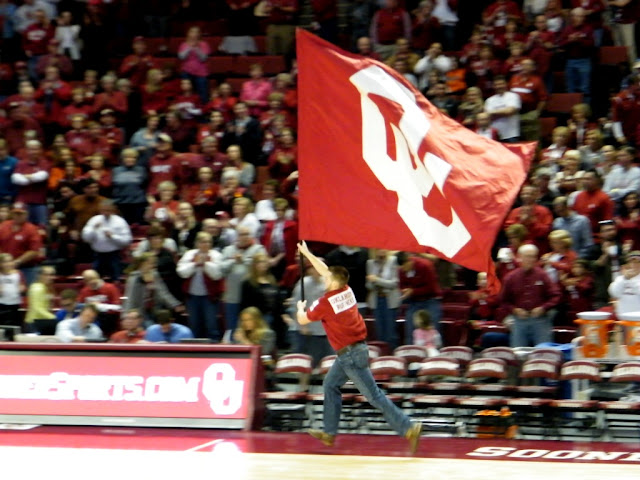 A line of half a dozen young men carrying OU flags ran full speed around the room, through the crowd, as the band played our state song, Ooooooooklahoma! The wind was sweeping down the plains for sure. I love that dang song. Apparently lots of people do, because I could hear the words being shouted here and there around the big room. 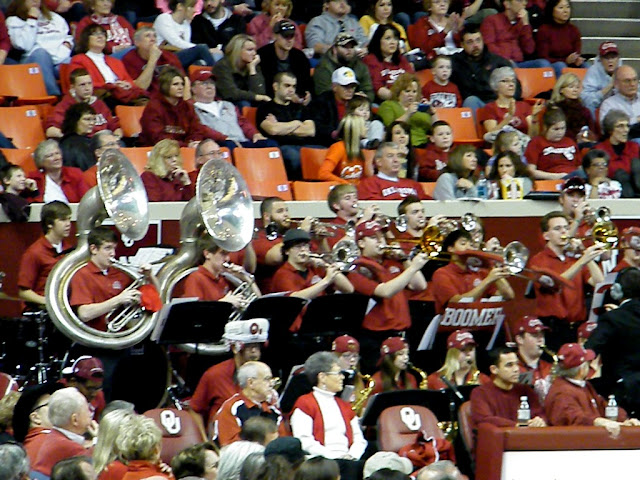 The crowd, mostly crimson but evenly dotted with orange, was in a perfect frenzy by the time a group of OU students unfurled an American flag the size of the basketball court. I have never seen a flag that expansive except at the top of a flag pole. They stretched it out, and both teams including their coaches and cheerleaders and mascots, referees, Honor Guard, everybody, dozens of people, held it respectfully along all four edges. The lights lowered, and chills washed over me.
A young woman in military uniform began singing an angelic version of our national anthem, and about halfway through the anthem something really special happened. The crowd joined her. As she gained momentum at the best parts, everyone sang behind her, tentatively, warmly, almost just humming. And it sort of seemed to propel the singer, which frenzied everybody all over again.
It was wonderful.
Between the two emotional songs, the crowd’s tangible love for OU and head coach Sherri Coale, and the unexpected fireworks behind each basket, I was crying big fat tears before tip-off. We cheered hard and soaked up the fun. I mean, really, at a bedlam game in your home state, no matter who usually has your loyalty, it’s hard to be disappointed when either team does well. And that was especially good today, because both teams played very well. It was a drum tight, energetic, nail-biting contest. I don’t think the margin was more than six points until the very last few minutes of the game, when OU finally won with 80 points to Oklahoma State’s 71 points. 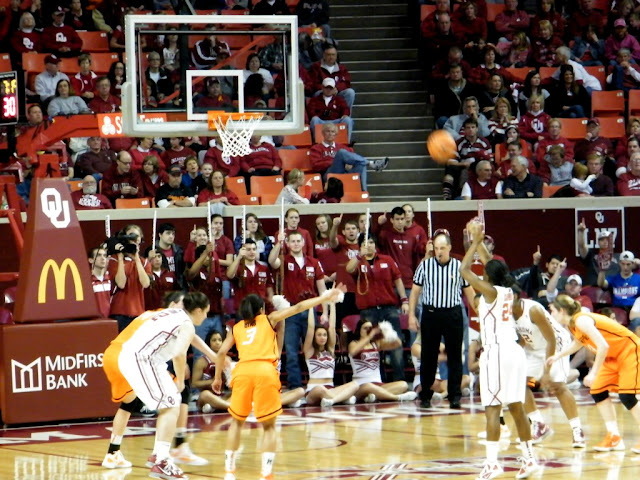 Oh, I almost forgot to tell you that the halftime entertainment was none other than Judson Laipply, the guy who does the Evolution of Dance. You know, the internet sensation who dances for a few seconds each to a long string of popular dance songs, spanning several decades? We were laughing so hard. I may or may not have been worried about wetting my pants. Even the most serious suit-wearing pages and security guards were sporting big, goofy grins. Old people shoulders were bouncing in laughter, too. Little kids were dancing along with him. It was awesome. 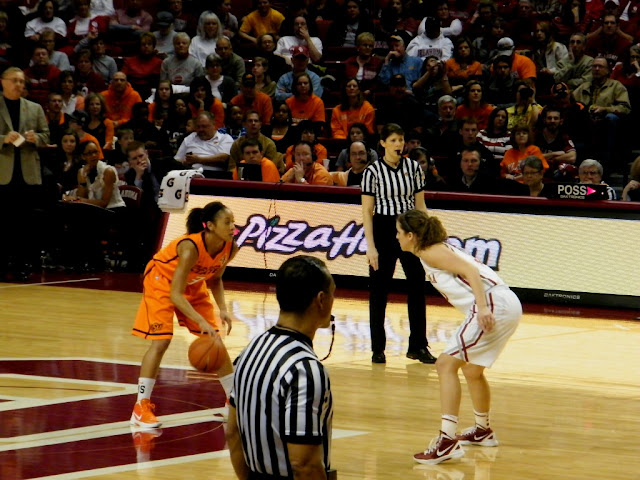 So for two hours we enjoyed the game and entertainment. The college athletes ran, dribbled, fouled, scored, and cheered each other on. During the second half I got to high-five one of the mascots and shake hands (hooves?) with the other. Boomer and Sooner. 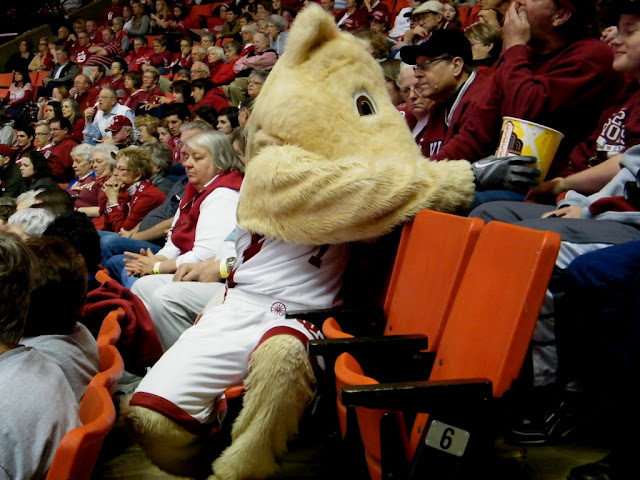 These OU women’s basketball games are always fun, but today was extra special. It was kind of a charmed event, and I am so glad we were there for it all.

Thanks a bunch Bob & Tina!!!
xoxoxoxo